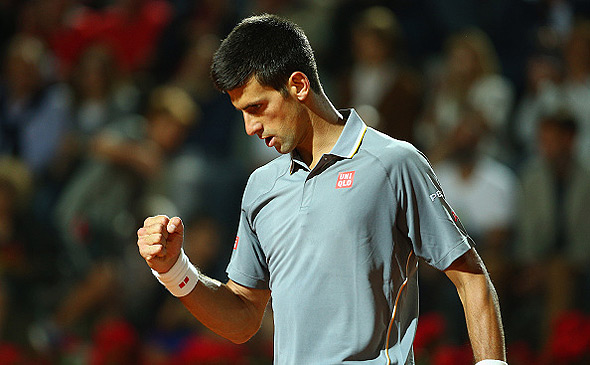 Four-time Rome champion Novak Djokovic advanced to his sixth semi-final at the Internazionali BNL d’Italia as he beat no.5 seed Kei Nishikori of Japan 6-3, 3-6, 6-1 in one hour and 48 minutes on Friday.

The 27-year-old Serb improved to 4-2 lifetime against Nishikori and extended his winning streak to 20 matches, which include his title runs in Indian Wells, Miami and Monte-Carlo.

Novak took the opening set with an early break. Nishikori fought back in the second, converting his chance in the sixth game. The Serbian star regained momentum and raced through a decider in 30 minutes with two breaks of serve.

“I have to be honest, I’ve not been playing as well as I was in Monte-Carlo and I’m still not at the level I want to be at,” admitted Novak. “Little by little, it’s coming together. I’m still in the semi-finals and the wins against high quality opponents can only help my confidence level. Hopefully I’ll be able to play better, more consistently, less ups and downs in tomorrow’s match.”

Novak will take a 14-5 H2H career advantage, winning the past eight meetings, into the semi-finals against no.7 seed David Ferrer (Saturday about 15:00 CET).

Looking ahead to the clash, Djokovic said: “I have another clay-court specialist, one of the best competitors on Tour and someone who isn’t going to hand me the win. He’s going to make me work.”