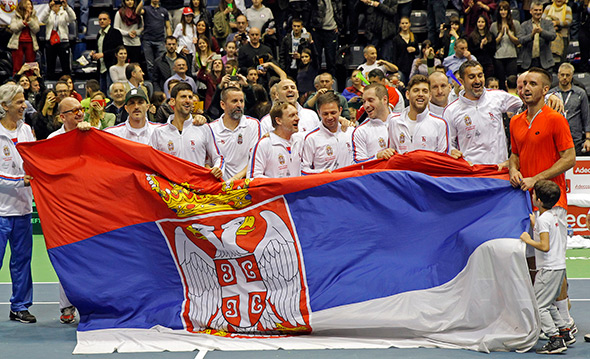 Serbia is through to the Davis Cup quarter-final after 3-2 win!

Novak dug deep to see off Mikhail Kukushkin and pull Serbia level at 2-2 in their Davis Cup by BNP Paribas World Group first round tie against Kazakhstan at Belgrade’s Aleksandar Nikolic Arena (Pionir Hall) on Sunday.

Kukushkin took the first set on a tie-breaker after 74 minutes of play, but Novak battled back to take the second in 80 minutes.

The Kazakh raced to a 4-1 lead in the third set with a double break. Nole broke back once, but the Volgograd native finished off the set to edge in front once again.

Nole found another gear to win the fourth set 6-3 and level the contest at two sets all, setting up an enthralling climax.

The momentum was with Novak in the deciding fifth set. He broke twice to win the battle, showing true grit and determination, and heart of a champion, as many times before.

“I want to congratulate my opponent for a fantastic performance and he would have been a worthy winner too. He was very consistent from the baseline while I have been struggling for fitness the last few days,” said Djokovic. “The fans were fantastic and their support got me out of trouble at key moments in the match. I was in bad shape after the third set but fortunately I pulled through and won. My body told me several times during the match that it’s had enough but with this crowd behind me, my heart and mind prevailed.”

Viktor Troicki brought a deciding third point to Serbia with a 6-2, 6-3, 6-4 win over Aleksandr Nedovyesov. The 2010 champions will host 2015 title holders Great Britain in the Davis Cup quarters on July 15-17.