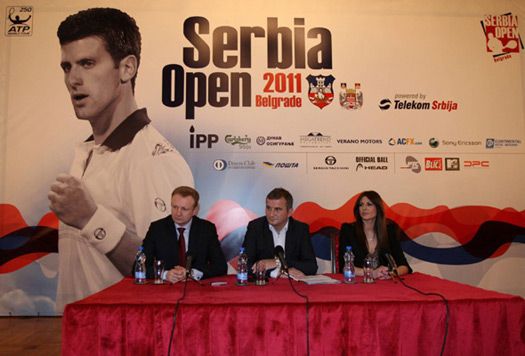 Less than 24 hours is left till the beginning of the third edition of the Belgrade ATP tournament “Serbia Open 2011 Powered by Telekom Srbija”, which will be held from April 23 to May 1, on the courts of the Tennis Center Novak.

28 players will compete for the title and 250 ATP points. Seeds 1-4: Novak Djokovic, Viktor Troicki, Guillermo Garcia-Lopez and Albert Montanes, have a first round BYE, and will start their campaign at the Serbia Open not before Wednesday.

One thing is certain – the favorite and 2009 champion Novak Djokovic and Viktor Troicki can not meet before the finals.

”Really looking forward to play in my city! Its going to be great event. Visit us and watch some pro tennis. SERBIA OPEN here I come!”, Nole wrote on Twitter. The world no.2 arrives in Belgrade today.

Wild cards have been given to Latvian Ernests Gulbis, Serbian Dusan Lajovic and former world no.5 Chilean Fernando Gonzalez, who is making his return after recovering from his right hip surgery.

Sam Querrey (USA) will not defend his title. He defeted fellow American John Isner in the finals last year.

Qualifying singles draw will follow right after the singles main draw. Qualifying matches start on Saturday, April 23, at 10am.

A charity football game, featuring tennis stars in Serbia Open team and celebrities in the Stars team, will take place at 2pm, as one of many activities at the Serbia Open 2011 tennis tournament.

Union of Tennis Professionals of Serbia will organise programme for the youngest – Kids Day, starting at 3pm.

Doubles main draw will be held on Saturday at 6pm, and the fashion show starting at 9pm closes the programme presenting the latest Distante collection.