Nole kicks off London campaign against Berdych on Monday (21.00 CET)! 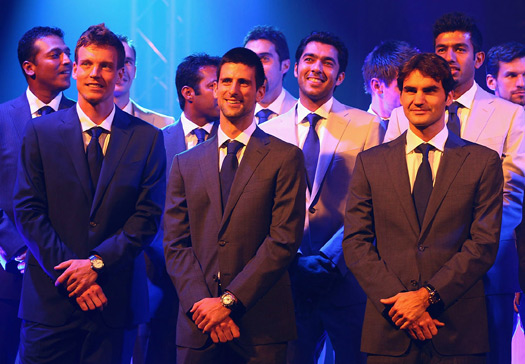 Nole will begin his quest for eleventh title in 2011 at the Barclays ATP World Tour Finals in London on Monday at 21.00 CET.

His first rival in group A is no.7 ranked Tomas Berdych. The world no.1 leads their H2H career record 7-1. All seven wins against the Czech have been on hard courts. Berdych’s only victory came in the semifinals of Wimbledon last year.

“Tomas had some great results in the last couple of weeks, especially last week in Paris, he won against Andy Murray to reach the semi-finals, so he’s in great form,” Nole said. “He’s somebody that has been around the Top 10 players of the world for the last five or six years. He’s been winning a lot of indoor events, so he likes playing indoors. We’ll see, it’s going to be a tough one.”

This will be Nole’s fifth consecutive appearance at the final tournament of the season. He has an 8-7 match record.

“Obviously everybody agrees that this tournament is a crown for all the achievements of the year,” said Novak, who secured his berth back in May. “Every match that you’re playing is at probably the highest level in our sport, then you have to be on top of your game to win it. Everyone wants to finish the season in great style, that’s what makes this event even more competitive.”

The 24-year-old Serbian star won his only Master Cup title at the season finale in Shanghai 2008 when he beat Russian Nikolay Davydenko.

Home crowd favourite Andy Murray and Spaniard David Ferrer, who are also in group A, play their first round robin match in day session on Monday. You can read more about the draw here .

Nole has a 69-4 record this year, winning 94.5 per cent of his matches, which is the fourth greatest season winning percentage.

“I would consider that to be one of the very best years in tennis of all time. He’s won three Grand Slams, he’s beaten the no.1 player at the time in six consecutive finals. That has never happened. It may not be the best statistically, but he’s beaten Federer, he’s beaten Nadal, he’s beaten everybody that came around to challenge him in the biggest tournaments in the world. That’s why I think it was just an unbelievable year.”

Novak, the 2011 Australian Open, Wimbledon and US Open champion, will officially be crowned as the year-end no.1 at a special on-court trophy presentation next week.