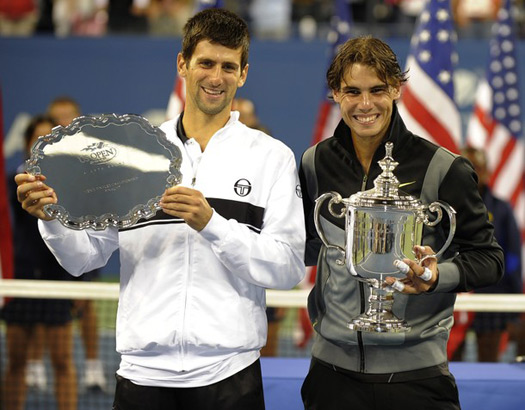 Third-seeded Novak Djokovic failed in attempt to capture his second Grand Slam title. He lost to world no.1 Spaniard Rafael Nadal after great fight in four sets 4-6, 7-5, 4-6, 2-6 in 3 hours and 43 minutes in US Open final on Monday.

Nadal made a break in the opening game of the match and held for 2-0. Djokovic earned himself a first break point and broke back in the fourth game to level the result. The Spaniard broke Novak’s service again in the fifth game and took the set 6-4 in 50 minutes.

The Serb held in the opening game of the second set without losing a point, sealing it with a forehand that Nadal couldn’t return. Novak broke Nadal in the fourth game and then held to love to increase his lead to 4-1. The Spaniard converted his third chance to break back and held for his third game in a row to equalise the score. Rain started to fall at 30-30 in the ninth game and the play was suspended.

After two-hour delay, the players went through their warm-up once again. Djokovic resumed serving at 4-4, 30-30 in the second set. Rafa pushed him to deuce twice but Nole went on to hold with a forehand winner down the line. The 23-year-old from Belgrade earned a break/set point in the 12th game and capitalised on it to win the set 7-5.

Novak was unable to maintain the momentum, with Nadal continually putting pressure on his serve. He was broken in the third game of the third set. Nadal had three chances in the fifth and five chances in the seventh game for a double break, but Djokovic put up a great fight. He had 30-15 when Nadal was serving for the set, but the world no.1 hit two service winners and an ace to clinch the set 6-4 in 57 minutes.

The 24-year-old Spaniard made a double break in the fourth set, in the third and fifth games, for 4-1 lead. Novak earned a break point in the sixth game but Nadal held and served out the match at 5-2 to become the youngest man in the Open Era to complete a career Grand Slam by winning his first US Open title.

“In order to win against him tonight, I had to be on the top of my game. I was playing really well for most of the match, but then there were some moments in, let’s say, third and fourth set where I dropped my focus a little bit. I dropped my level of game and just a little bit on service games. He took it away, and he never gave me a chance to go back. I had this 15 30 chance in 5 4 third set, and then he served, I mean, three amazing serves. So I think that’s one of the key factors today in his win except an amazing baseline game, of course, and great coverage of the court,” said Djokovic after the match.

“This is one of the matches where the opponent plays better than you, and you just have to congratulate him and tell him, You’re better. That’s it. I don’t think I played a bad match overall. It was very good performance from my side. But whenever it was important, he was the one who was playing just too good.”

“Of course, I am feeling bad about my loss. I wanted that trophy, and I know I gave my maximum to get it even tonight. But, you know, when I sleep over the night, tomorrow I will wake up as a new man. You know, I will continue on working hard and waiting for the next chance to come,” concluded Nole, also the runner-up at Flushing Meadows in 2007.

As a result of reaching US Open finals, the best Serbian tennis player has climbed to no. 2 in the rankings again this week, overtaking Roger Federer, who has dropped to position no.3.

Novak will be heading to Belgrade for next weekend’s Davis Cup World Group semi-final match against Czech Republic.