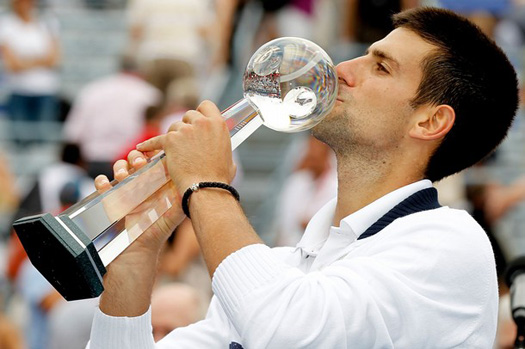 “History making, of course it’s special,” Novak said about the fantastic accomplishment. “Of course, it’s an honour and privilege to be part of the history of the sport that I love and that I play.”

After saving break points in the third and fifth games, Djokovic broke the last two Fish serves to take the first set 6-2 in 38 minutes.

Novak lost his momentum in the second set. The American broke him twice, in the fifth and ninth games, to level the match at a set each.

Nole showed his strength and character of a true champion in the decisive third set. He made a crucial break in the fifth game and kept the advantage till the end to clinch the remarkable victory.

Djokovic’s first serve win percentage was 70, compared to 72 for Fish.

Novak capitalised on 3 of his 8 chances for break, while the American converted 2 of his 10 break points.

\”It was another great effort from Novak, I\’m getting a bit tired of this though,\” joked Fish.

\”I\’m not getting tired of this (victories), it was a pleasure playing against Mardy. My team and I have done it again,\” said Novak. \”It\’s so great to win another title. We played a great match, I had a few lucky points in the third set to break.\”

“I think I was more nervous than in the previous matches today,” admitted Nole. “Well, it was the final. There was a lot of tension going on. It was a very close match. He wanted to win that match as much as I did. That\’s why we were quite intense. It was a mental fight, as well. It was not just physical. But I managed to hold my composure when I needed to.”

This is Nole’s tenth career ATP World Tour Masters 1000 title, and his second in Montreal (he beat Federer in 2007 finals).

The 2008 and 2009 runner-up has a first round BYE and will face either world no.22 Argentine Juan Ignacio Chela or American Ryan Harrison in round 2 in his seventh appearance at the ATP World Tour Masters 1000 event.