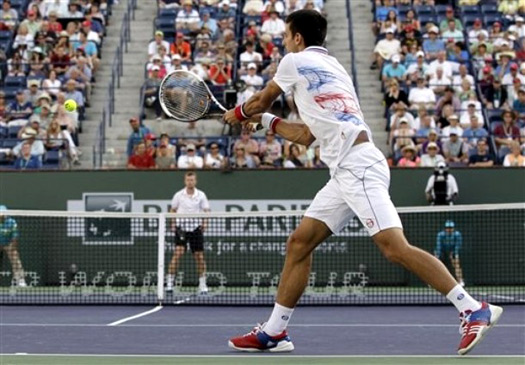 Nole continued his run at the BNP Paribas Open in Indian Wells on Monday, dismissing Kevin Anderson of South Africa in straight sets, 6-2, 6-3 in 1 hour and 37 minutes.

After saving a break point in the fifth game of the opening set, the top seed and defending champion made a double break for 6-2 in 54 minutes.

A break in the sixth game of the second set was enough for the Serb to close out a comfortable victory.

“The opening set, especially opening five games, took half an hour or more,” said Novak. “He’s very aggressive on the return games. He has a great serve, as you can imagine for his height, so I had to return well. I had to just be patient, and wait for my chances.”

Djokovic converted 3 of his 6 break point opportunities to advance into the fourth round of the ATP World Tour Masters 1000 event for the sixth year in a row.

The 24-year-old Belgrade native improved to 12-1 on the year, highlighted by triumph in Melbourne at the first Grand Slam of the season.