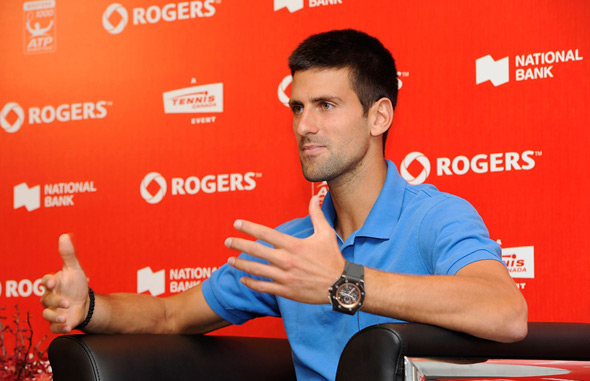 Taking to Centre Court at 7 pm, Novak was welcomed by a cheering crowd in his first match on hard courts, his favourite surface, after four months.

There were many break point opportunities on both sides in the opening set, Nole converted his chances in the sixth and eighth games for 6-2 in 41 minutes.

A break in the eighth game of the second set was enough for the world no.2 to record his 46th win of the season.

“For the first match it was a decent performance,” said Djokovic. “Obviously at the start we played very long opening four games, and I was struggling to find the rhythm… It’s totally different conditions, time zone, ball bounce, everything. But I love playing on hard court. It’s my favourite surface. Obviously when I needed to play well and be patient, I’ve done that really well today. Serve was working really good, so that’s a positive.”

Novak will next play American Sam Querrey (35) who upset no.13 seed Kei Nishikori of Japan.

The third round match was scheduled on Thursday, but both matinee and evening sessions were cancelled due to rain.

If Novak beats Querrey (Friday, 13.00 local time), he will also play his quarter-final clash against Tommy Haas or Radek Stepanek on Friday evening.

The 25-year-old Serbian star triumphed at the Rogers Cup last year in his first tournament as the world no.1, and set a new record by claiming his fifth ATP World Tour Masters 1000 title of the season. He also won on his Canada debut in 2007.

“It’s great to be back in Canada for the Rogers Cup,” Nole said. “I had lots of success in Canada in previous years, and I love coming back here and playing here. Lots of support, lots of people from ex-Yugoslavian region that live here and come and support. People in Canada love tennis and appreciate the tennis players. For us it’s great to be a part of such a great event.”