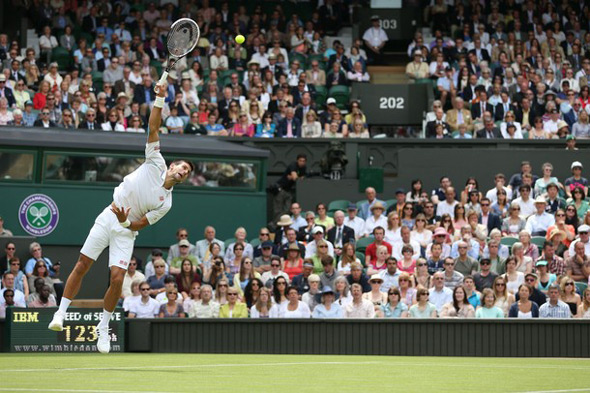 2011 Wimbledon champion Novak Djokovic opened his title defence campaign on Monday, easing past former world no.1 Juan Carlos Ferrero in straight sets 6-3, 6-3, 6-1, to claim his first victory at the event in 98 minutes.

Traditionally, the reigning champion opened action on Centre Court at the All England Club.

“It’s a very unique feeling. I think that’s the first time I experienced that in my career. The grass was untouched. It was so soft, so smooth. It was great to play in,” Nole said.

Djokovic clinched his first round win in convincing and impressive fashion. He won 84 per cent of points on his first serve and converted 6 of 11 break point chances to improve to a 37-6 record on the season.

Novak held with ease in the opening game. He found three big first deliveries to establish a good rhythm. Ferrero was first to make a break, but Nole composed himself and struck back immediately to level at 2-all.The top-seeded Serb broke for the second time to take control and closed the set 6-3 in 32 minutes.

World no.1 was playing very fluently and with confidence. He soon found himself a set and a break up. Ferrero once again failed to hold serve under tremendous pressure in the ninth game, and Djokovic took the second set 6-3.

The 25-year-old Belgrade native raced to a 5-0 lead in the third set. He used his second opportunity to seal the set and match 6-1 firing an ace down the T line, for his second career victory over the Spaniard in three matches.

“It’s never easy to play against Ferrero on any surface,” said Novak. “I thought he showed his quality in the first two sets but I really found form in the third. It was very encouraging.”