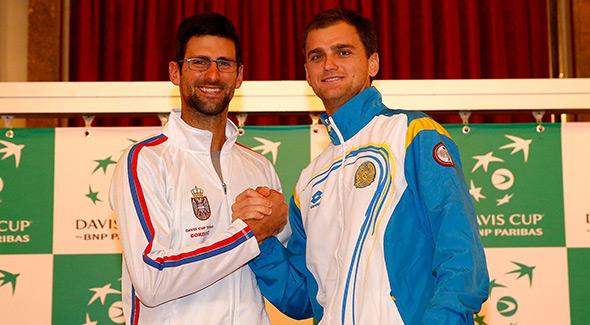 Kazakhstan took a 2-1 lead against Serbia in their Davis Cup by BNP Paribas first round tie after Andrey Golubev and Aleksandr Nedovyesov beat Novak Djokovic and Nenad Zimonjic 6-3, 7-6(3), 7-5 in Saturday’s doubles.

The teams were locked at one-all after Friday. Mikhail Kukushkin defeated Viktor Troicki 7-5, 6-2, 6-4 to level the tie, after Novak dominated Alexandr Nedovyesov in the opening rubber.

The Serbian and world no.1 broke twice in each of the sets to seal a routine 6-1, 6-2, 6-3 win on an indoor hard court in Belgrade. Novak saved the only break point he faced, while converting six of 15 he created during the one hour, 53-minute match.

“We had never played before but I was aware that Nedovyesov plays with a lot of heart and can be a very awkward opponent when given time to hit the ball, hence I knew I had to change the rhythm and mix it all the time to unsettle him,” Novak said. “It’s a great honour to have played my first Davis Cup tie in this iconic venue.”

It is the first Davis Cup tie played in the Aleksandar Nikolic Arena since 1989, when the former Yugoslavia beat Denmark 4-1 in the competition’s first round. The venue was called Pionir until a recent change of name to honour one of Serbia’s iconic basketball coaches.