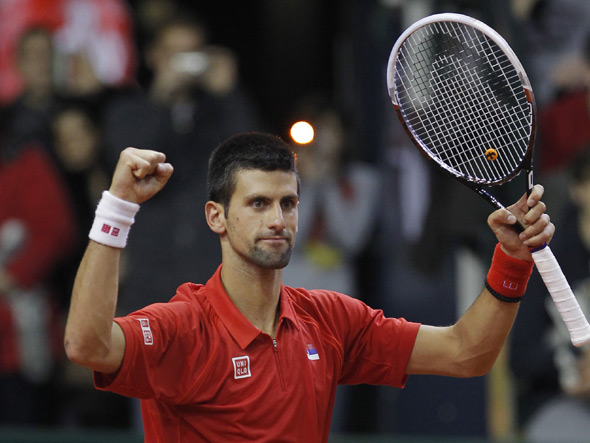 World no.1 Novak Djokovic defeated Belgium’s Olivier Rochus in the second rubber on Friday to put the 2010 champions into a commanding 2-0 lead heading into tomorrow’s doubles action in the Davis Cup by BNP Paribas World Group first round tie.

Despite the switch from the fast hardcourt conditions in which he won his third consecutive Australian Open title five days ago – to the slow indoor clay, the six-time Grand Slam winner needed just one hour and 39 minutes to beat the 127th-ranked Rochus in straight sets 6-3, 6-2, 6-2.

Nole broke the 32-year-old Belgian in the sixth game of the opening set and won it 6-3 converting his second set point.

He was even more convincing in the second set, breaking his opponent’s serve twice, in the fifth and seventh games, for 6-2.

Djokovic clinched the third set 6-2 with a love service game, bringing Serbia one win away from the Davis Cup quarter-finals.

“The serve was incredible and I think that helped me to get the match done in straight sets which was important,” Novak said. “It wasn’t easy playing on clay after a long time indoors and coming from Australia quite late. At the start I had trouble with movement and getting used to the conditions but I played my best tennis when I needed to.”

Earlier today, Viktor Troicki came back from two sets down to beat David Goffin 1-6, 3-6,
7-6(5), 6-4, 6-4 and gave Serbia the early lead against Belgium at the Spiroudome de Charleroi venue.

“Viktor came back from 0-2 down, David was playing really well, it was a superior play on the court. Viktor was not on his level, but still he was fighting, he believed he could come back and win the match, and he brought this very important point to Serbia. 2-0 up after first day is a great advantage,” concluded Djokovic.

This leaves Nenad Zimonjic and Viktor Troicki with the chance to complete the victory on Saturday in the doubles. They will face Ruben Bemelmans and Steve Darcis in attempt to give their team the crucial third point.