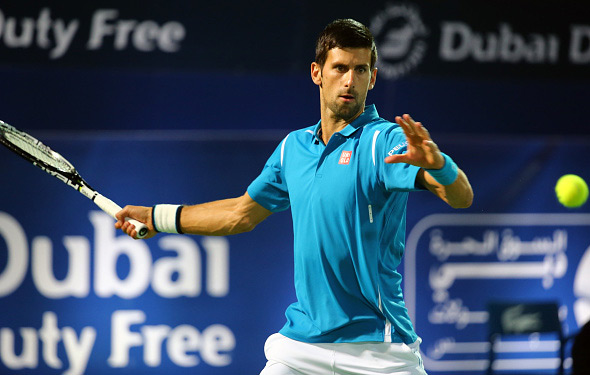 Serbian tennis star Novak Djokovic recorded the 700th win in his career as he defeated Malek Jaziri 6-1, 6-2 to reach the quarter-finals of the Dubai Duty Free Tennis Championships on Wednesday.

He became the 12th man in the Open Era to break the 700-win barrier, and the third active player to reach the milestone, following in the footsteps of Roger Federer and Rafael Nadal.

“Every milestone is special and gives you an extra motivation to play well,” Novak told ATPWorldTour.com. “Being a part of the history books is a huge honour and is something that is always present, even though you try not to focus all your attention on record-breaking opportunities. You use it to push yourself to give your best.”

The 28-year-old holder of 11 Grand Slam titles, who lifted his 61st trophy last month in Melbourne, needed 65 minutes to beat the Tunisian, lifting his record to 14-0 on the season.

Djokovic broke twice in both the first and second sets, and fended off the only break point he faced during the first career meeting between the two. The top seed won 80% of points on his first serve, and his second serve points won percentage was even better, 82.