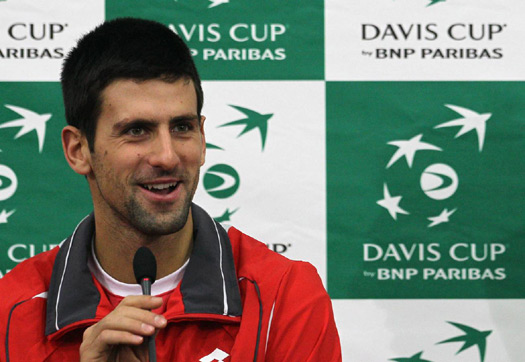 Serbia is at full strength with world no.3 Novak Djokovic leading the team. World no.30 Viktor Troicki, no.49 in the ATP Rankings Janko Tipsarevic and the fourth ranked doubles player in the world Nenad Zimonjic are also in the squad.

France’s captain Guy Forget can count on world no.12 Gael Monfils and currently ranked no.23 Michael Llodra. Forget also named Gilles Simon (42) and Arnaud Clement (78) to the team. Richard Gasquet arrived with them in Belgrade.

The tie will be held on an indoor hard court in Belgrade Arena (capacity 15,200).

Serbia’s star and number three in the world, Novak Djokovic, said that the French side should not suffer too much from the absence of their top star, Jo-Wilfried Tsonga.

“Maybe it is better for them that he is not playing, because he has not been in such good form recently due to his injury,” Novak said at the pre-draw press conference.

“But they have Monfils, who is playing better than ever, and they have such versatility, with so many players who can play either singles or doubles,” said the 23-year-old.

He also looked back to the recent loss to Llodra: “It will be a very different match, a different surface, a different occasion and, to be honest, I would not mind playing him”.

Serbia is bidding to become the 13th nation to be crowned Davis Cup champion.