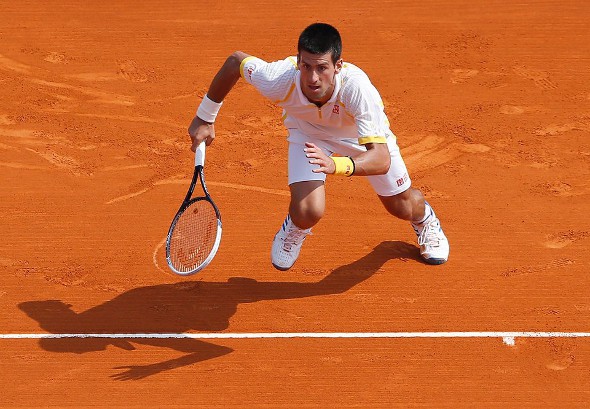 World no.1 Novak Djokovic recorded his 22nd victory in 2013 as he opened his Monte-Carlo Rolex Masters campaign with a hard fought 4-6, 6-1, 6-4 win over no.27 in the ATP rankings Russian Mikhail Youzhny on Wednesday.

The two-time runner-up came through against an inspired opponent in two hours and 15 minutes and booked his place in the last 16 at the first clay court Masters event of the season.

Youzhny raced to a 4-0 lead in the opening set. Novak got one break back, but the Russian sealed it 6-4 in 42 minutes.

Once the first set was over, the top seed found his rhythm and started playing better. He reduced the number of unforced errors and won 14 straight points at one stage. Nole broke his rival twice, in the fourth and sixth games, and won the set 6-1 in 38 minutes.

Djokovic kept the momentum to break in the first game of the deciding set. The former world no.8 fought back to level. At 3-3, Youzhny saved three break points but he couldn’t do the same at 4-4. Novak made a crucial break and served out the set and match 6-4.

“My movements on the clay are still not at the maximum and not where I want them to be,” said Novak. “But as the days go by, I think I’m going to slowly get into it and hopefully I can elevate the level of performance in the next match. Today was a big test, I had a great quality opponent. I’m very happy to win and happy to compete.”

Djokovic won 70 per cent of points on his first serve and broke Youzhny five times from 10 opportunities. He was 14/18 on net approaches.

Novak will take a 6-0 H2H record into a third-round clash against no.14 seed Juan Monaco on Thursday. The Argentine eliminated Latvian Ernests Gulbis 6-0, 3-6, 6-3.

The 25-year-old Belgrade native had made a late decision to compete at the event, after making a swift recovery from the twisted ankle he sustained a week earlier in Serbia’s Davis Cup tie against the USA.