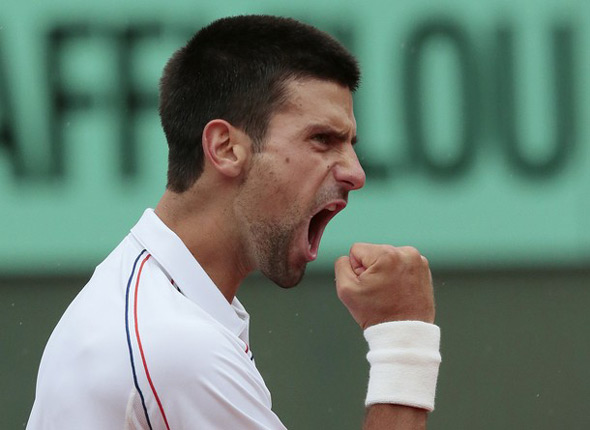 The first set was one-sided. Novak won it convincingly in just 21 minutes.

When he broke Tsonga to love with ease in the opening game of the second set and consolidated the break for 2-0 lead, it looked like he was in total control, but the home-crowd favourite made him work hard for the semi-final berth.

Novak handed Tsonga a break point in the eighth game with an unforced error and the Frenchman broke back to equalise the result to 4-4. Tsonga broke again in the 12th game to level up the match at one-set all.

Players exchanged breaks in the third set and then they both held until the 12th game. With the help of the French crowd Tsonga again made a crucial break to move 2-1 ahead.

Nole had break point opportunities in the fifth and ninth games of the fourth set, but the 27-year-old Le Mans native got out of trouble with powerful serving. Djokovic showed his heart of a champion when he saved four match points serving to stay in the match. He then took the set winning a tie-breaker 8-6 to level up the match at two-sets all.

The momentum was with Nole in the decisive fifth set. He made a double break and sealed the victory to keep his hopes for fourth straight major alive.

“As a tennis player, this is what you live for,” said Djokovic. “This is what you practise for all these years, to be part of an incredible performance, incredible match. I’m really glad that I could win today.”

Speaking of his ability to fight off four match points, Nole said: “It’s, I guess, trying to be mentally tough and believing in your shots. Obviously a little bit of experience that I had playing on this level for last five, six years. I did have some matches similar to this one when I was match points down and managing to come back.”

Novak is now on a 26-match winning streak at the majors and 30-7 lifetime at Roland Garros.

It will be their 26th career meeting, Roger leads 14-11. Novak won their last encounter in the semi-finals of Rome Masters.