Nole self-confident ahead of the tie vs Spain! 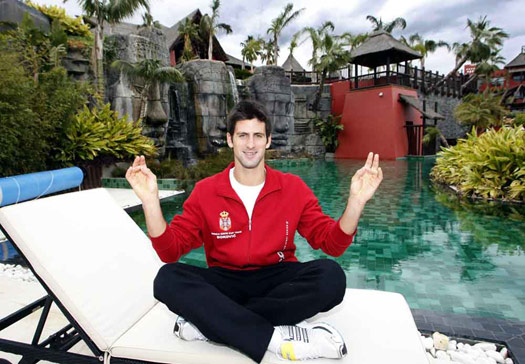 Number three in the world, the best Serbian tennis player Novak Djokovic is full of self-confidence one day before the draw for the first round of World Group Davis Cup tie between Spain and Serbia.

The main subject is the surface, clay?

- Clay. That’s simply the surface that suits the Spanish team, because they all grew up playing on it. It isn’t in our blood as much as it’s in theirs. Players from Spain, starting from the world no.1 Rafael Nadal downward, all achieve their best results on clay. Nadal has won four Rolland Garros titles in a row. They are impeccably physically prepared, and the slowest surface suits them best. But we can see that over the years they have been improving, and are becoming dominant on other surfaces too, like Nadal on grass and hard courts.

About the team of Spain?

- Their biggest strenghth is having Rafael Nadal as their leader. When he’s around they gain the additional strength, especially in front of their home crowd. But in a competition such as Davis Cup, it doesn’t always happen that the favorite wins.

It happened in the last season’s final when the Spaniards without Nadal surprised Argentina away?

- On ATP tournaments we primarily represent ourselves, and then our country, and in Davis Cup we all play for our country, we put Serbia first, and that’s the additional motive to put on even better performance.

Have the weather conditions disrupted practice?

- The conditions are the same for everyone. To be honest, I did arrive a bit later than the others.

You had a good reason. You won the tournament in Dubai.

- Yes, that’s the only excuse I have.

- Although we’ve been given the toughest possible draw this year, we musn’t give up without a fight. I truly believe that we have realistic chance to beat Spain. We’re a young team, full of potential. With the quality we have we’re capable of beating any team in the world.