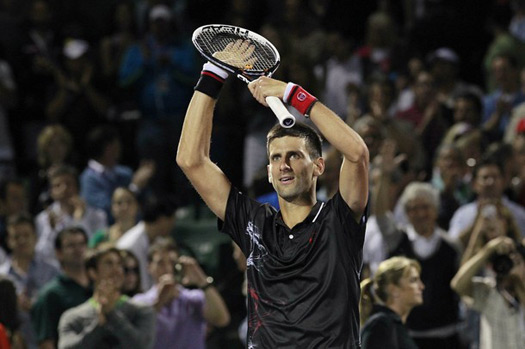 Top seed and defending champion is through to his fourth Miami Masters final!

The Serbian and world no.1 stormed through the opening set with a triple break for 6-0 in just 27 minutes.

Novak broke Monaco’s serve in the fifth game of the second set and consolidated the break to increase his lead to 4-2. He was serving for victory at 5-4 when the Argentine broke back, and the set went into a tie-breaker. Nole won it 7-5.

“As I did yesterday in the quarter-finals, I started very strong, just going for the shots, being very aggressive,” said Nole. “Then I just wasn’t able to close it out. It was a very similar match to the one against Ferrer… It was an exciting match I think for us to play and for the crowd. I didn’t expect an easy match and I’m just happy to be through.”

Novak will face fourth-seeded Andy Murray on Sunday at 13.00 local time (19.00 CET). The 24-year-old Scot advanced to the Sony Ericsson Open final without hitting a ball after Spaniard Rafael Nadal withdrew with a left knee injury.