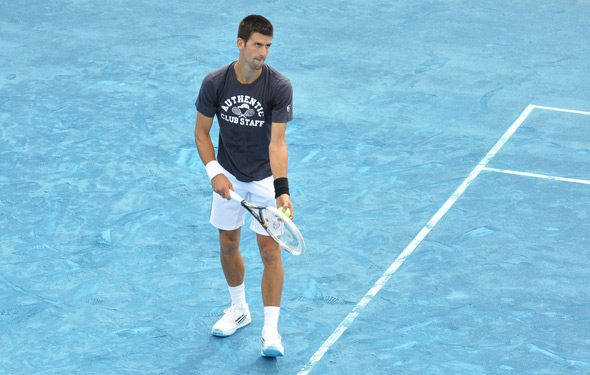 Nole is through to the third round of the Mutua Madrid Open.

The world no.1 overcame second-round test against Daniel Gimeno-Traver, winning in three sets 6-2, 2-6, 6-3, to progress on the new blue clay at the ATP World Tour Masters 1000 event.

Djokovic converted 3 of his 12 break points and won 88 per cent of points on his first serve to eliminate the 137th-ranked Spanish qualifier in 1 hour and 46 minutes.

Novak stormed through the opening set breaking his opponent’s serve twice, in the fourth and eighth games, for 6-2 in 33 minutes.

The defending champion lost his momentum in the second set, while the Spaniard raised the level of his game. The 26-year-old made two breaks to level at one set apiece.

Games went on serve until the the sixth game of the deciding third set, when Novak made a crucial break. The Serbian top seed had no problems in closing out the match with a comfortable hold.

“Taking into consideration that this was my first official match on the blue clay and that my opponent today already had three matches behind him, maybe that was a little disadvantage on my side,” said Djokovic. “To try to find a good balance here is very difficult, so whoever anticipates well here will play well.”

Nole said it was “impossible to move” on the Manolo Santana show court.

“I hit five balls throughout the whole match, everything else I was just trying to put the ball in the court so I just rely on my serve and getting some points eventually from his unforced errors,” he added. “For me that’s not tennis.”

The 24-year-old Belgrade native improved to a 25-3 match record on the season (5-1 on clay), highlighted by winning his third Australian Open and Miami titles.