Nole through to round of 16, wins 60th match of season 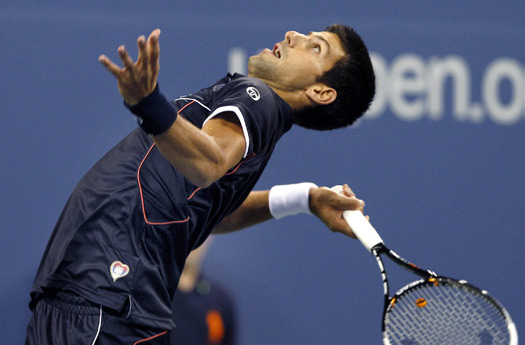 World no.1 Novak Djokovic, who finished runner-up to Nadal at Flushing Meadows last year, continued his run of form with a 6-3, 6-4, 6-2 win over the dangerous Nikolay Davydenko.

Nole booked his spot in the fourth round beating the former world no.3 in 2 hours and 7 minutes at Arthur Ashe Stadium on Saturday evening.

Novak converted the first of three break points in the fourth game of the opening set as Davydenko double faulted. The world no.1 held to consolidate the break for 4-1 lead. The Russian fought back in the seventh game but Nole broke his opponent’s serve once again and closed the set 6-3 in 38 minutes.

Despite many break points on both sides, the second set went on serve until the seventh game when the top seed gained a break to move ahead 4-3. Nole cruised through his both service games till the end of the set and won it 6-4 in 57 minutes.

The 24-year-old Belgrade native took the momentum into the third set. He broke Davydenko twice, in the first and fifth games and confidently served out the match 6-2.

“I had some ups and downs in my match today,” said Novak. “But it’s the first test I’ve had this tournament and it was expected. I was aware of his quality. Davydenko is a great player; he knows how to play majors. He went out there and played his game, very aggressive. I think I was a little bit too defensive at the start and that’s why I was missing a lot of balls from the forehand side. But when I needed to adjust I did and I got crucial breaks each set. The third set was better.”

Nole has yet to drop a set in the tournament. He’s been enjoying a dream run in 2011. The top-ranked Serb now has a remarkable 60-2 win-loss record, with five ATP Masters titles and 2 Grand Slams already in his trophy room this year.

Novak will face no.22 seed Aleksandr Dolgopolov in the next round. The Ukranian took out giant-serving Croat Ivo Karlovic in four sets.

The two players have never met before.

“I know most people expect top players to get to the late stages of the tournament, so there’s extra pressure on us,” Nole said. “But it’s a challenge we’re ready to accept. Now we are in the second week, and we are expecting tough matches.”