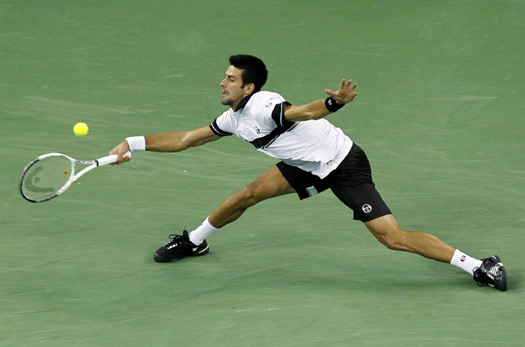 World no.2 Novak Djokovic powered into the semi-finals of the Shanghai Rolex Masters with a convincing 6-2 6-3 victory over world no.35 Spaniard Guillermo Garcia-Lopez in 65 minutes.

Djokovic saved two break points in the opening game, but he overcame his slow start to hold serve. Nole made the first break of the match in the fourth game and then held to increase his lead to 4-1. We then saw three consecutive breaks, one by Garcia-Lopez and two by Novak, and the Serb clinched the set 6-2 in 31 minutes.

Nole earned three break points in the fourth game of the second set, and used his third opportunity for 3-1. It was enough for the second seed to win the set and match 6-3.

“I felt great on the court today,” said Novak after the match. “Garcia Lopez has been playing some good tennis in last couple of weeks, beating Nadal in Bangkok. I was aware of his speed on the court. He hits the ball really well from the baseline. He made me work for the points. Even though it looked comfortable at 2 and 3, I had to really be aware of the speed of the ball that was coming from the other side of the net.”

The 23-year-old from Belgrade advanced to his 8th ATP World Tour semi-final this year and improved to a 52-13 match record on the season .

He will face no.3 seed Roger Federer for a place in the finals. The Swiss beat fifth-seeded Robin Soderling of Sweden 6-1, 6-1.

Nole and Jonathan Erlich lost to no.2 seeds and Belgrade natives Nenad Zimonjic and Daniel Nestor 6-7(4), 6-4, 5-10 in the doubles second round.