Nole tops Rafa to reach the last four in Rome! 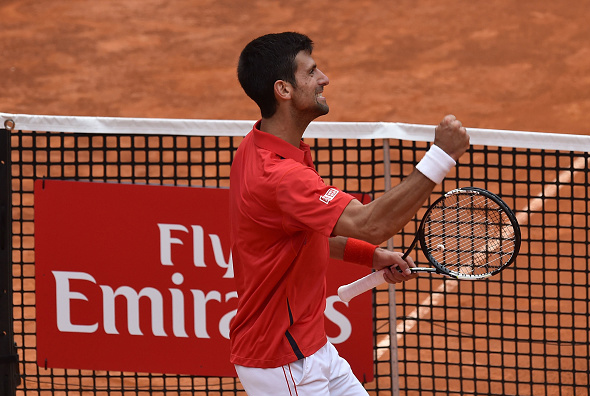 Nole is two wins away from his third consecutive Rome Masters title.

Defending champion Novak Djokovic continued his run at the Internazionali BNL d’Italia after defeating no.5 seed and seven-time former titlist Rafael Nadal 7-5, 7-6 (4) in a thrilling encounter to reach the semi-finals of the Italian Open on Friday.

The 28-year-old Belgrade native now leads their Head2Head series 26-23 and has won their past seven meetings.

Between them, Djokovic and Nadal have won the past 11 editions of this ATP World Tour Masters 1000 tournament, held at the Foro Italico.

Novak rallied from a break down to win the first set 7-5 against the Spaniard. The top seed was raising his level as the set went on. He was 2-4 behind, but fought back to level at 4-all. In a pulsating 12th game, Nole kept the pressure on Rafa and sealed the set in 72 minutes after a huge point.

Djokovic also came back from 2-4 down in the second set to force a tie-breaker, which he won 7-4. The match lasted two hours and 24 minutes.

“I held my nerve at the clutch moments,” said Novak in an on-court interview. “Even though I had nervy beginnings to both sets, with some good games and good play in the crucial moments, I managed to win. It’s a straight-sets win, but it feels like we played five sets. Winning against Nadal is the ultimate challenge on clay courts and one of the toughest challenges we have in sport. I have to be very pleased with the way I handled myself in the big moments today. I won against one of my biggest rivals on his preferred surface. We must not forget he’s in form. He won Monte-Carlo and Barcelona and has played well the past couple of weeks. That gives me confidence for the rest of this tournament.”