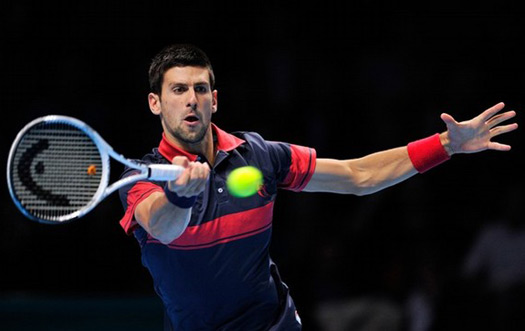 World no.3 was impressive in his opening match at the Barclays ATP World Tour Finals in London, dismissing Czech’s no.6 seed Tomas Berdych 6-3, 6-3. The first Group A match at The O2 arena lasted 1 hour and 28 minutes.

Nole broke his opponent’s service already in the opening game of the match. The 23-year-old Belgrade native was dominant, he made another break in the ninth game and took the set 6-3 in 43 minutes.

Djokovic earned a break point in the second game of the second set and broke Berdych for the third time in his debut match at the Finals. The Serb, who will lead his country in December’s Davis Cup finals against France, held to 30 to increase his lead to 3-0. He was convincing serving for the match and closed it 6-3.

“I couldn’t ask for a better start of the tournament,” said Novak after the match. “I was trying to focus on my game and do the things that I planned to do tactically with my coach. I think I did well. You have to be really on the top of the game in order to win, because these players who are taking part in this tournament are the best players in the world. There is no easy match, easy opponent.”

Diego Maradona was sitting among Nole’s entourage during the match. The best Serbian tennis player was inspired by the presence of the Argentine football legend.

“Thanks for coming,” Djokovic said on court after the victory. “It’s a great honour having you around. When he came in during the middle of the first set, I wondered whether I should play with my legs or my hands!” The joke was well accepted and followed by applause of the crowd who still remember the midfielder’s first goal in the 1986 World Cup quarter-final.

Djokovic gets 200 ATP points for his first win in the round-robin stage.