Nole vs Nadal for Miami title! 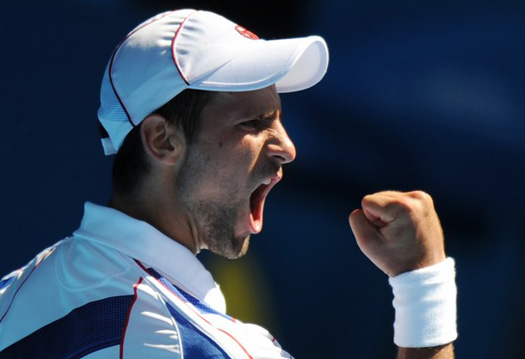 Reigning Australian Open champion Novak Djokovic continued his fantastic winning streak with a 6-3 6-1 victory over no.14 seed American Mardy Fish in 1 hour and 25 minutes to move into his third Miami Masters finals.

Novak got himself ahead with a confident service hold to 15. The world no.2 saved two break points in the third game with two aces and held for 2-1. Rain started falling at 2-all and the match was suspended.

“The first couple of games were quite strange. The wind was blowing. It was quite humid. Just different conditions, I guess. I came to the match not really moving well, and was just lucky enough not to go a break down,” said Novak.

The players were back out on court after 55 minutes, and after their warm up the match was continued.

Djokovic converted his third break point in the sixth game and then comfortably consolidated his break for 5-2 lead. The best Serbian tennis player saved two more break points in the ninth game before closing the set 6-3 in 50 minutes.

“I can’t say I’ve played that point well. It was just lucky that I read his intention with the drive forehand volley. I stayed on the same side and I hit as hard as I can through the middle and he put his volley out.”

Nole was dominant in the second set. He made a triple break for convincing 6-1.

Djokovic is aiming for a fourth title this season after already winning the Australian Open, Dubai and Indian Wells.

“Whoever I play, I obviously wouldn’t feel like a favorite on the court… and by the way, it is a final, so in order for me to win I will have to be on the top of my game against either of those two players.”

Nadal leads their head-to-head 16-8, but on hard courts, Nole has an 8-5 record against the Spaniard.

The final match is scheduled on Sunday.

“Miami is a great city. I won my first title of the Masters 1000 events here and I definitely have beautiful memories from this event and I want to try and win this trophy again,” said Nole.