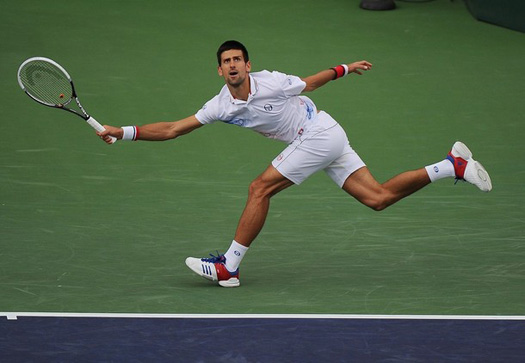 In an all-Serbian third round match at the Sony Ericsson Open on Monday, world no.1 Novak Djokovic defeated his friend and Davis Cup teammate no.27 seed Viktor Troicki 6-3, 6-4 in 85 minutes to reach the fourth round in Miami.

Nole now leads their head-to-head series 11-1. After losing their very first meeting in 2007, Novak has beaten Troicki 11 times in a row.

The top seed at Key Biscayne made a break in the second game of the opening set and saved five break points in the next game to go up 3-0. He served out the set with ease 6-3 in 42 minutes.

The 24-year-old Serbian star secured another early break and consolidated it for 2-0 lead in the second set. He had three break points for 3-0, but Troicki held and broke back in the fourth game to level the result. Nole broke his friend’s serve once again in the seventh game and closed the set and match winning his final service game to love for 6-4.

“I needed some time to get used to the heat today and the different conditions,” Novak said after the victory. “Generally I feel that I have been playing well in these two matches. I did have some ups and downs, especially in today’s match, but I’m confident that I can raise the level of performance in every match.”

Djokovic, playing in Miami for the 7th time, won 73 per cent of his first serve points and converted 3 of his 8 break point opportunities.

The reigning champion will next meet no.17 seed Frenchman Richard Gasquet, who beat Spaniard Albert Ramos in three sets 6-2, 5-7, 6-3 in 2 hours and 34 minutes.

Nole takes a 5-1 lead over Gasquet into their last 16 clash to be played on Tuesday.

“Gasquet has one of the nicest one handed backhands in the game, very nice serve; he can play equally well defensively and offensively. He’s gonna be a very tricky opponent, obviously. I just need to go out on the court and be aggressive, because that’s where I feel most comfortable.”