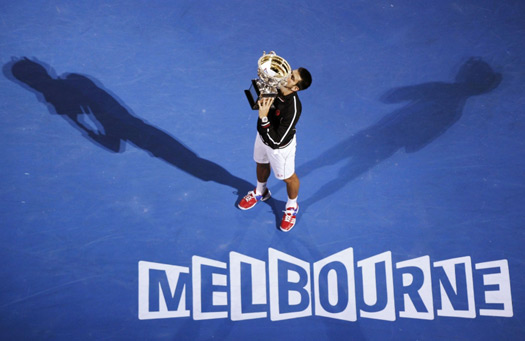 First set lasted 1 hour and 20 minutes. Nadal made a break in the fifth game and saved two break points before holding to increase his lead. Novak broke back and held to equalise the result. The Manacor native made one more break and closed the set 7-5.

Nole earned two break points in the second game of the second set, but Nadal held. The Serb continued to push Rafa, broke his serve in the fourth game and consolidated the break to increase his lead to 4-1. He missed one set point in the eight game and squandered two more serving for the set at 5-3. The Spaniard broke back, but Novak put the pressure on him once again and forced him to deuce. The 24-year-old Belgrade native brought up a fourth set point with a booming backhand winner and took the set 6-4 in 66 minutes when Nadal double-faulted.

The top seed continued his momentum into the third set. He made a double break and stormed to 6-2 and two sets to one lead in the grand finale.

Nole was pushed to deuce twice in the opening game, but held to move 1-0 ahead in the fourth set. He earned himself three break points in the eighth game, but the Spaniard fought off all. The pair was locked at 4-4 when rain suspended play for 10 minutes to get the roof closed. The set went into a tie-breaker. Though Novak had a 5-3 lead, Nadal won it 7-5; the set took 88 minutes.

In a dramatic contest on Rod Laver Arena, Nole showed mental toughness when he overcame a 2-4 deficit in the fifth set. He fought back to 4-4 and broke Rafa again in 11th game to earn himself a chance to serve for the win. The Serbian superstar saved a break point before claiming a remarkable victory and 29th career title.

Novak converted seven of his twenty break point opportunities, while Nadal capitalised on four of his 6 break point chances.

“Rafa, you’re one of the best players ever, one of the most respected players on tour. We made history tonight; unfortunately there couldn’t be two winners tonight. I wish you all the best for this season and I hope that we will have many more finals like this,” said Nole at the trophy ceremony.

The 2009 winner praised our champion: “Congratulations to Novak and his team, they deserve it, they are doing something fantastic, so congratulations. To start the season here and play this fantastic match against Novak is, I believe, a fantastic start.”

It was the third successive Grand Slam final that Nole and Rafa have played, and the Serbian no.1 extended his winning streak over Nadal to seven straight matches (six wins in 2011 – Indian Wells, Miami, Madrid, Rome, Wimbledon and US Open).

He continued to narrow the gap in his H2H series with the Spaniard to 14-16.

Djokovic has become only the fifth man since the Open Era started in 1968 to win three straight majors (joins Laver, Sampras, Federer and Nadal).

He’s also joined Agassi, Federer and Wilander as only players in Open Era to win 3 and more Australian Open trophies.

With this memorable victory, Nole, one of the bravest fighters in the history of the game, claimed back-to-back titles in Melbourne and defended 2000 ATP points for a perfect start of the 2012 season. 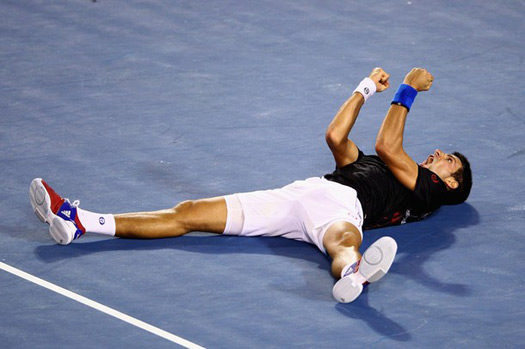