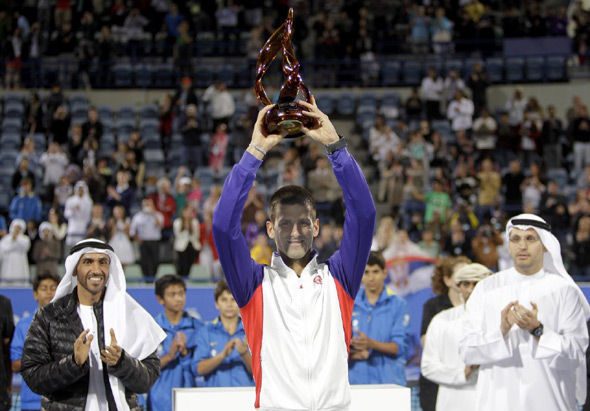 Games went on serve in the opening set. Novak earned a mini break advantage in a tie-breaker, but Almagro then won six of seven points and clinched it 7-4.

Nole broke his opponent in the first game of the second set, but the Spaniard broke back immediately. Djokovic earned another break point opportunity in the third game and Almagro double-faulted to go down 1-2.The 25-year-old Belgrade native consolidated the break for 3-1 lead and converted one more chance to take the set 6-3.

Djokovic made a crucial break in the tenth game of the deciding set for 6-4.

“It was a fantastic experience again for me coming to Abu Dhabi. This is a very nice tournament, we always get great matches, very tough matches against top opponents, and great attendance also,” said Novak at the trophy presentation.

“I started a bit slow because I didn’t feel as fresh and sharp as yesterday and I expected that because we’ve been working very hard the last few weeks and it’s catching up a little bit, so it’s great to come out a winner from a match like this.”

The prestigious exhibition tournament being played in Abu Dhabi, UAE, now in its fifth year, is one of the region’s most eagerly anticipated sporting events bringing six of the world’s top tennis players to the Abu Dhabi International Tennis Complex in Zayed Sports City.

Novak will now head to Perth, Australia.  He will team up with Ana Ivanovic to represent Serbia at the 25th Hyundai Hopman Cup, the international mixed team event to be staged at the new Perth Arena from December 29, 2012, to January 5, 2013.

They will open campaign at the traditional warm-up competition leading into the Australian Open on Monday, December 31, 2012, at 10:00 local time (03:00 CET) against Italy. Singles matches are followed by mixed doubles.

USA, Spain, South Africa and France will compete in Group B.