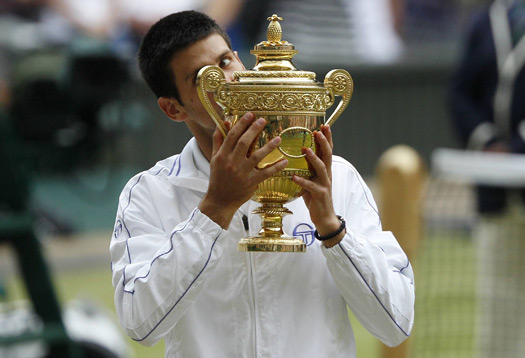 Let’s look back at Nole’s remarkable season, one of the best in the history of the ATP World Tour.

The 24-year-old Serbian star ascended to no. 1 in the world on July 4 for the first time in his career and clinched 10 titles on four continents, including Australian Open and his first-ever Wimbledon and US Open crowns. 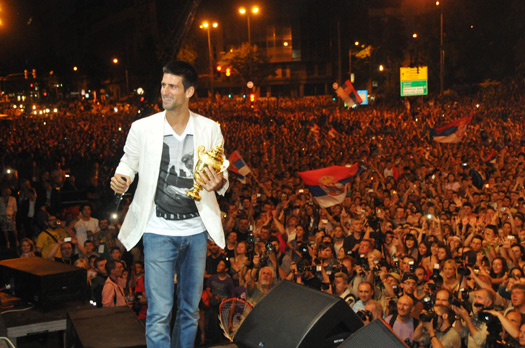 Nole captured three of the four Grand Slam titles in 2011, as he opened his historic campaign with a big win at the Australian Open — where he was also the titlist back in 2008 — and secured an ATP tour-record five ATP Masters shields in one season.

The Belgrade native’s most stunning achievement this year was his six victories over Nadal in six finals, including the huge wins on the grass at Wimbledon and the US Open. He became the first player to beat Rafa in consecutive major finals.

Novak also beat the Spaniard in four ATP Masters event title matches – in Indian Wells, Miami, Madrid and Rome. And two of those victories came on red clay, a surface that had simply been dominated by Nadal in the past years.

In addition to the six finals wins over Rafa, Nole was a brilliant 4-1 against one of the other all-time greats – Roger Federer. His lone loss against the Swiss came in the semifinals at the French Open, which prevented the Serb from appearing in his first-ever championship match at Roland Garros. It also halted Novak’s remarkable near-record season-opening winning streak at 41 matches (John McEnroe opened his 1984 season at 42-0). Djokovic actually had an overall winning streak of 43 matches, which included two wins in the Davis Cup finals that capped his 2010 season (the overall record winning streak is 46, achieved by Argentine great Guillermo Vilas in 1977.)

Novak ‘avenged’ that Federer defeat by stunning the Swiss in the semifinals in New York. It wasn’t really stunning that Novak beat Federer in Flushing, it was just stunning how he did it.

Facing match points while trailing 5-3 in the decisive fifth set, Nole avoided elimination with an improbable massive cross-court return forehand winner at 15-40 in the ninth game. The unbelievable shot shocked Federer and ultimately propelled Novak into his third US Open final.

Nole reached 11 finals in 2011, with his lone loss coming at the Cincinnati Masters to world no. 4 Andy Murray. The Serbian star retired due to a shoulder injury.

The best Serbian tennis player of all time finished his amazing year with a 70-6 record. Similar to other players in the top 10, Novak began to feel fatigued at the end of such a demanding season and three of the losses came over his last six matches.

Nole also became only the fifth man in the Open era (since 1968) to win three majors in a calendar year.

Djokovic inspired his friend and Davis Cup teammate Janko Tipsarevic to finally fulfill his potential and talent. Tipsarevic won his first ATP trophy in Kuala Lumpur and soon the second title followed in Moscow. Prior to that, Janko was considered to be the best player on tour without a championship. He cracked the top 10 for the first time in his career (finishes season at no.9).

Another great year for Serbian tennis! After capturing their first-ever Davis Cup title in December 2010, Serbia now has two players in top 10.

Reflecting on a hugely successful season, Nole believes it was his new-found maturity which made the difference.

“It’s true that I have improved but by a very small percentage,” he told ESPN. “It’s the same game I’ve had the last couple of years; it’s my mental approach on the court that’s changed. That was the difference. I stepped it up. I matured and said, ‘It’s my time. I can do it. I can win major titles’. I think luck falls on not just the brave but also the ones who believe they belong there.”

After a break, Novak will return to action in Abu Dhabi on December 29. That will be his only preparation for the first Grand Slam in 2012, the Australian Open.

He already has his sights on another prestigious title on the Wimbledon courts at London 2012.

“I’m only 24, and I want to have many more successful years, win as many major titles as possible,” Nole said. “The Olympics are coming up. I want a medal.”