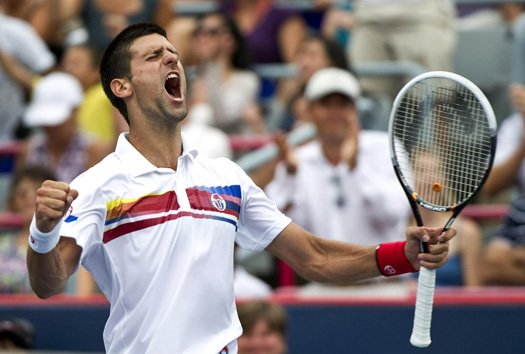 Nole continues his remarkable run in 2011.

The world number one opened the match with an ace and held serve in the first game. He made a break in the fourth game for 3-1 lead, but Stepanek broke back immediately. We saw third consecutive break on centre court, and this time Nole held to consolidate it for 5-2. He failed to convert two break/set points in the eighth game, but used his chance serving for the set and took it 6-3 in 45 minutes.

There were six breaks in the second set, Nole made four to win another match this year and book his place in the last eight.

“There are periods of the match where I serve okay and then periods where I serve very bad, but that’s okay,” said Novak. “It all happens. I played so many matches, and they caught up to me a little bit. It’s expected that some part of my game is not working 100 per cent. But I believe that tomorrow the serve will be better. It’s important to have the right mindset and positive attitude. I don’t think that my rhythm is bad, it’s just a little bit my toss and I’m out of balance on my serve and I’m forcing it a little bit too much. Maybe I should go a little bit for percentage rather than speed.”

Novak next plays no.6 seed Gael Monfils. The Frenchman eliminated world no.47 German Philipp Kohlschreiber 6-2, 6-2. Djokovic has defeated Monfils in their previous 7 meetings, the last was in Montreal 6-2, 6-1.