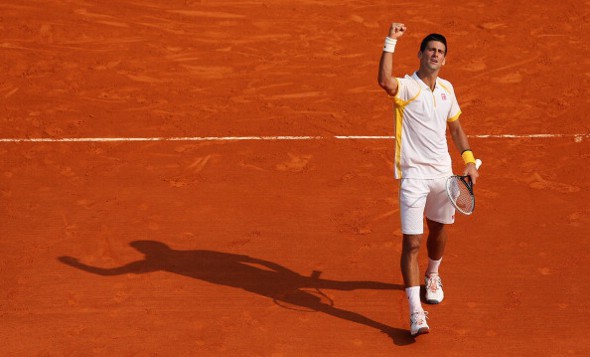 Monte-Carlo Rolex Masters top seed, Novak Djokovic, rallied from a set down to beat world no.20 Juan Monaco of Argentina 4-6, 6-2, 6-2 on Thursday to reach the quarter-finals of the ATP World Tour Masters 1000 event.

The Serbian no.1 broke seven times from 11 opportunities to improve to a 7-0 career lead, claiming victory in just over two hours.

Monaco made a break in the third game of the opening set and consolidated it for 3-1 lead. Novak fought back in the eighth game to level at 4-all, but was broken once again, and the no.14 seed won it 6-4 after 46 minutes of play.

Like yesterday, Djokovic lifted the level of his game in the second set, showing why he is the best player in the world. He was more aggressive, hitting more winners and making less unforced errors to wrap it up 6-2.

The two-time runner-up sealed the decisive third set 6-2 to improve to a 23-2 record of the season. He now has a 17-6 career record at the Monte Carlo Country Club.

“It’s another big test, again a two-hour match,” said Novak. “Obviously I’m not physically out there feeling my best. Somehow feels that I always miss that half a step. But I’m trying. I’m fighting. After I lost the first set today, I tried to find that inner strength. I found it again. So that’s a positive thing. Every day brings a new challenge and we’ll see what happens tomorrow.”

For a place in the last four, Novak will meet world no.49 Jarkko Nieminen of Finland who upset fifth-seeded Argentine Juan Martin del Potro 6-4, 4-6, 7-6.