Novak advances to quarter-finals in Dubai 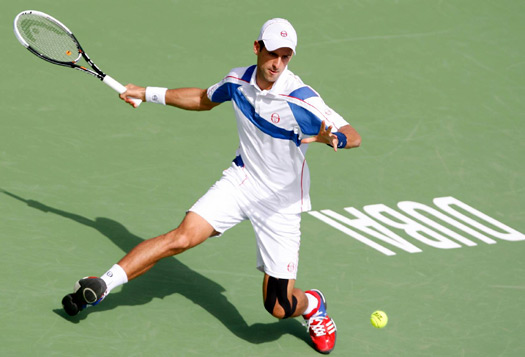 No.2 seed and defending champion Novak Djokovic beat world no.41 Spaniard Feliciano Lopez 6-3, 2-6, 6-4 in 1 hour and 48 minutes to reach the quarter-finals at the Dubai Duty Free Tennis Championships on Wednesday.

Djokovic opened the match with a comfortable hold. Nole’s pressure brought result in game four. He capitalised on his second break point opportunity and then consolidated the break for 4-1 lead. The 23-year-old Belgrade native wrapped up the opening set 6-3 in just 31 minutes.

The Australian Open champion regained momentum in the decisive third set. He broke his opponent’s serve in the opening game. Lopez put the pressure on Djokovic in the sixth game and made a break to level the result, but Nole broke back immediately and held for 5-3. The Serb converted his second match point and closed it 6-3.

“I think my coach will be happy with how many times I went to the net tonight, even though maybe it wasn’t more successful. But I was going there and trying to change things. We’re working on it… When I needed to return and keep the ball in play in the rally where I feel more comfortable than he does, that’s what did I. Maybe that made a difference,” said Novak in his postmatch interview.

Nole’s next opponent will be world no.38 German Florian Mayer who defeated Andrey Golubev of Kazakhstan 6-3, 6-4.

The match is scheduled on Thursday. It will be their first ATP World Tour encounter.