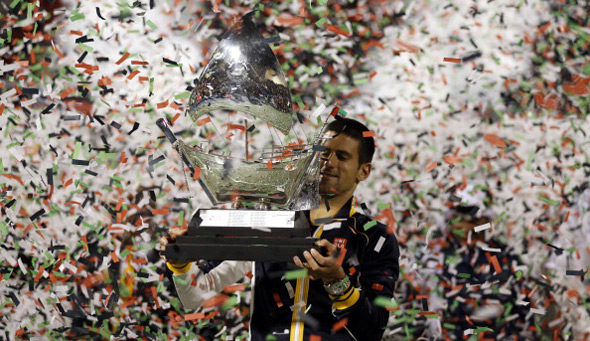 World no.2 Novak Djokovic will make his return to the ATP World Tour as the defending champion at the Dubai Duty Free Tennis Championships (Feb 24 – Mar 1). He will be attempting to win the tournament for a fifth time in six years (2009-11, 2013).

It will be Novak’s eighth appearance at the ATP World Tour 500 event, one of the most popular tournaments on the international tennis circuit.

Five of the top ten men are in the field. Along with the top-seeded Serb, a stellar line-up also features Juan Martin del Potro, Tomas Berdych, Roger Federer and Jo-Vilfried Tsonga.

“The pressure is always there as a top player. I do feel there’s always high expectations,” said Djokovic. “But it’s all part of our sport. It’s what we need to deal with, accept it and try to use it in a positive way. That pressure is a privilege in a way, because it means you’re doing something valuable, something important. In my life I’ve always dreamed of being on this stage, competing at the highest level. I really enjoy every moment spent on the court.“

The main singles draw for the 2014 edition will be held on February 22 at noon local time.

After the tournament in Dubai, the US hard court spring swing begins with two Masters 1000 events – the BNP Paribas Open in Indian Wells and the Sony Open Tennis in Miami.