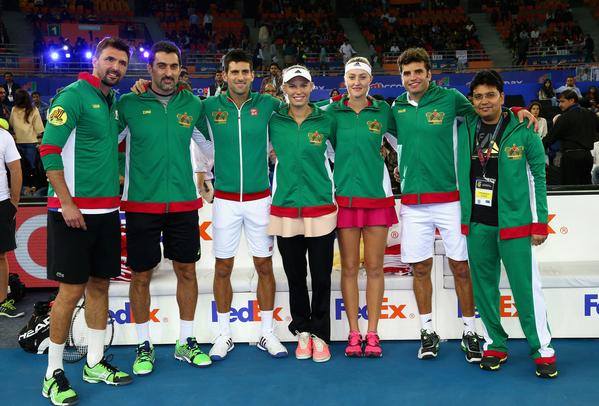 World no.1 Novak Djokovic made his debut with UAE Royals in a four-team International Premier Tennis League (November 28-December 13).

Nole got a fantastic reception upon his introduction at the Indira Gandhi Indoor Arena on Sunday. He took to the court in doubles with Nenad Zimonjic against Jo-Wilfried Tsonga and Daniel Nestor. They lost it 5-6 after a 5 minute shoot-out which decided the winner.

The International Premier Tennis League brings together current champions, tennis legends and upcoming talents in a format that’s never been seen before.

Over 80 players participated in the draft held on March 2 in Dubai. A total of 29 players were added to the 4 franchise teams – the Philippines, Singapore, India and the UAE.

The teams will play 24 matches in total, in a round robin format to determine the inaugural IPTL Champion. Each match comprises five sets in a different format – men’s singles, women’s singles, men’s doubles, mixed doubles and men’s legends.