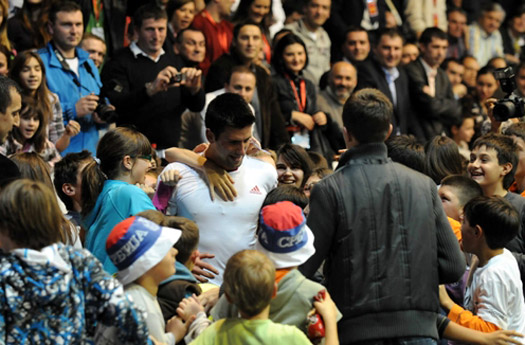 The great entertainment spectacle lasted more than 1 hour, and we could see all the specialties we’re used to seeing from Novak during his career. The most interesting were impersonations.

On several occasions, tennis players were replaced by children who had opportunity to play several points against their idols. The player who was not on court at that moment was surrounded by children, taking pictures and signing autographs. The same was after the match…

Unlike Troicki, who has participated at the Banja Luka Challenger before, it’s Djokovic’s first appearance in front of spectators in the capital of Republika Srpska.

“I’m in Banja Luka for the first time, but I am in touch with the people who live here and they’ve been telling me that people here love tennis so much and follow my matches. I’m glad we came here and we’ll be happy to spend several hours with the citizens of Banja Luka and Republika Srpska”, said Novak on the court before the match.

34.000 convertible marks have been raised. The money will be used for building playgrounds for children with disabilities who reside in the Institute of Physical Medicine and Rehabilitation “Dr Miroslav Zotovic” in Banja Luka.

The organiser of this charity exhibition match was “M: tel” company, under the auspices of government of Republika Srpska.

Novak will now have time to rest and prepare for the 2010 season and attempt to take over the world no.2 spot.