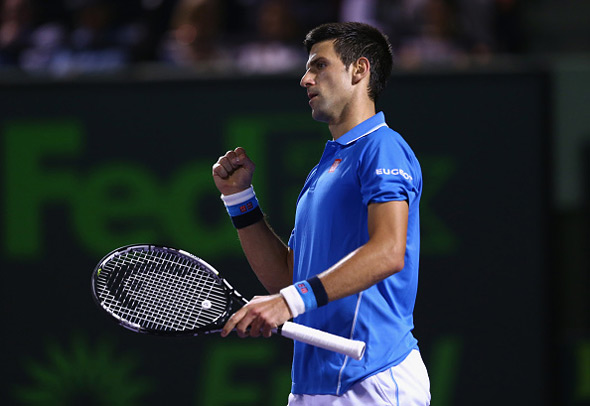 World no.1 Novak Djokovic moved one step closer to retaining the Miami Open presented by Itaú title when he came back from a set and a break down to beat Alexandr Dolgopolov 6-7 (3), 7-5, 6-0 on Tuesday.

Though he wasn’t at his best, Novak managed to overcome the fourth round challenge in one hour and 58 minutes.

The players traded breaks twice in the opening set. Dolgopolov was convincing in a tie-breaker. He won it 7-3 to move ahead.

Djokovic was 1-4 down in the second set, but managed to regroup and break twice, taking six of the next seven games for 7-5.

Novak raced to a 6-0 in a decider, winning 24 of 27 points. The Belgrade native sealed his 22nd win of the season and improved his perfect H2H record with Dolgopolov to 4-0.

“I fought my way through,” said Djokovic. “I was frustrated. I was losing my composure in the first set, because I didn’t feel good. So I was just trying to find a way to come back in the match. I don’t feel that I’m very fresh on the court, even though I’m trying. Again, I’m in the quarter-finals of this tournament. This day off tomorrow will definitely serve me and help me to recover mentally, because physically I’m fine. I feel okay. Hopefully I can perform better in the next one.”

Novak goes on to face sixth-seeded David Ferrer for a place in the last four. The Spaniard eliminated Gilles Simon 7-6, 6-0.

Djokovic has a 13-5 career mark against Ferrer, having won their last seven encounters.