Novak battles past Seppi to reach the finals! 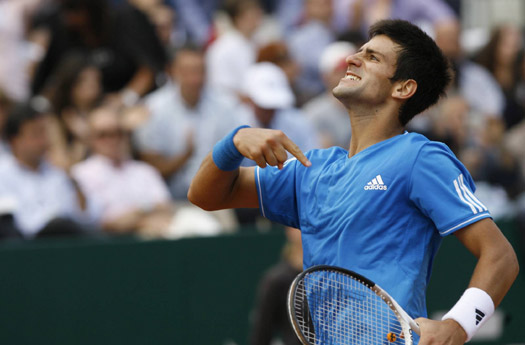 Third seeded Novak Djokovic came back from a set down to defeat world no.35 Italian Andreas Seppi 4-6 6-1 6-2 in 2 hours and 17 minutes for his fourth consecutive ATP World Tour final.

The opening game lasted fourteen minutes. Djokovic won it to take a lead. The 21-year old Belgrade native saved three break points in the seventh game, but got broken in the ninth. He had two break chances to come back into the set, but Seppi held to win it 6-4.

Novak was dominant in the second set. He made three breaks, two more than his opponent and took it 6-1.

The Serb broke Seppi’s service in the opening game of the third set and once again in the fifth game. He held to increase his lead to 5-1. The best Serbian tennis player was serving for the match at 5-2, and had no problem closing it 6-2.

Djokovic will play against LL Lucasz Kubot of Poland (world no.179) in the finals of the inaugural Serbia Open. Kubot upset no.2 seed Ivo Karlovic 7-6 6-2. The two players have never meet before.

The final match is scheduled on Sunday at 16.00 CET.