Novak battles through to his first finals of the season! 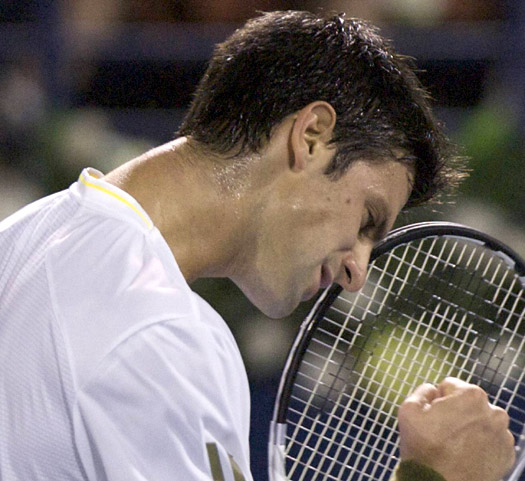 World number three had two chances for a break in the third game, but Simon held. The Frenchman used his chance when Djokovic made 3 unforced errors in a row in the sixth game. That was the only break in the set, Simon won it 6:3.

Both players made many errors in the second set. Novak broke Simon’s service for the first time in the 12th game to take it 7:5.

Djokovic didn’t start well in the third set. He was broken in the opening game. Novak was struggling to come back into the match, but he made it in the sixth game when he broke his opponent’s service to equalise to 3:3. Just like in the second set, Nole made a crucial break in the 12th game for 7:5 and earned himself a place in the finals of the Barclays Dubai Tennis Championships.

“I think I fought my way through in the match, really believed till the end and mentally this is a very important win for me,” said Djokovic. “If I want to stay on top of the men’s game, I have to win these matches because Simon is certainly one of the best players in the world.”

A disappointed Simon said: “I was just playing very badly, so even when I had opportunities I wasn’t not able to do anything with them. I had several chances to break him in the second and third sets, but every time I just made a mistake. I think I had enough chances to win this match and finally I lost it, so that’s why it is a very bad match.”

He will play against David Ferrer in his attempt to win the 12th career title. The Spaniard defeated Frenchman Richard Gasquet in straight sets, 6:2 6:2.

Djokovic and Ferrer have met six times, H2H is 3-3.