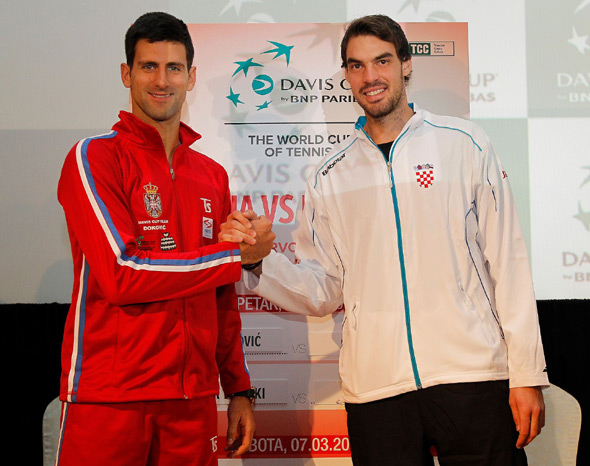 Novak Djokovic and Viktor Troicki both won on the opening day at Kraljevo Sports Centre to give Serbia a 2-0 lead over Croatia going into Saturday’s doubles.

The world no.1 beat Mate Delic (158) in straight sets to put hosts Serbia ahead in the Davis Cup by BNP Paribas World Group first round tie.

The 27-year-old Belgrade native broke four times from six opportunities and didn’t face a single break point during the one hour, 29-minute encounter.

Djokovic won 93% of his first service points and was 5/6 on net approaches.

“I was very much aware of my young opponent’s quality. He does have a lot of potential to be very good in the future,” Novak said. “I am happy with my overall performance. I took my break point opportunities very well and on the other hand I served confidently and didn’t face any break points at all. I enjoyed the atmosphere very much as I played for the first time in Kraljevo and this region in general. It was a full house and overall a very positive emotion.”

The Saturday doubles is scheduled at 14:00 CET. If Nenad Zimonjic and Novak win the third point against Franko Skugor and Marin Draganja, Serbia will reach quarter-finals.