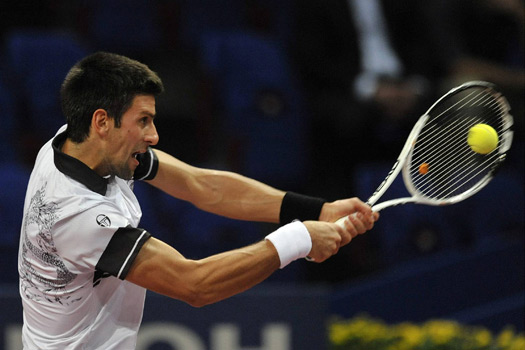 World no.3 Novak Djokovic found his way back from a slow start to reach the third round at the BNP Paribas Masters, beating world no.24 Argentine Juan Monaco 6-4, 6-3 in 1 hour and 23 minutes.

Novak was broken in the third game of the first set. He fought back in the eighth game, converting his second opportunity to level to 4-4. The defending champion faced scare in the ninth game, but held and broke Monaco’s serve once again to take the set 6-4 in 42 minutes.

Nole saved break points in the first and third games of the second set before making a crucial break in the sixth game for 4-2 lead. The no.2 seed held to 15 serving for the match and closed it 6-3.

“He was taking the balls early and being aggressive, and he was the better player at the start of the match,” said Novak after the second round victory. “I was lucky to get the break. When I did that I regained confidence and control of the match, and felt better on the court.”

Djokovic served 7 aces to Monaco’s 1.
The Serb hit 19 winners to the Argentine’s 12, and made 20 unforced errors, 6 less than his opponent.
Djokovic capitalised on 3 of his 4 chances for break, while Monaco converted only 1 of his 8 break points.

Novak will next face world no.34 Michael Llodra. The Frenchman upset no.16 seed American John Isner 6-3, 6-4.

Djokovic won their only encounter in Miami 2007.