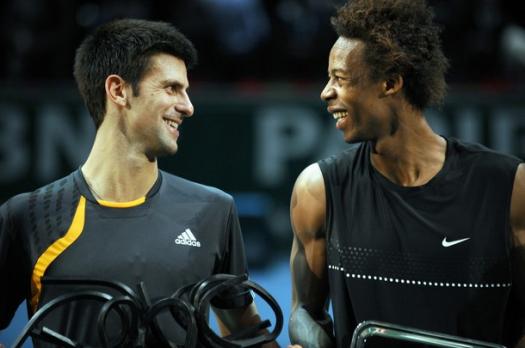 Third-seeded Novak Djokovic clinched his 16th career title and fifth of the year, with a fantastic three sets win over no.15 seed and hometown favourite Gael Monfils 6-2, 5-7, 7-6(3) in 2 hours and 43 minutes at the BNP Paribas Masters in Paris.

Djokovic was dominant in the first set. He made two breaks, in the fourth and eighth game, to take it 6-2.

The 22-year-old Serb cruised through his first service game of the second set, broke his opponent’s service in the second game and held for 3-0 lead. At 3-1 Djokovic handed Monfils his first break point of the match. No.15 seed used the opportunity, broke back and then leveled up with a solid service game. Nole was broken once again in the eleventh game and the Frenchman closed the set 7-5 to level the match.

Novak held to 15 at the beginning of the third set. He earned three break points in the second game, and converted the third chance winning a 43 shot rally. Monfils broke back immediately, but Djokovic broke again and held for 4-1 lead. The Frenchman fought back breaking Nole’s service in the seventh game. The set went to a tie-breaker, Nole won it 7-3 to clinch his first ATP World Tour Masters 1000 title in his fifth final this season.

”Winning back-to-back titles on this level is a huge achievement for me, and adding to that, beating No. 1, No. 2 of the world”, said Djokovic after the finals. “I’m very pleased with my performances in the past four, five weeks. I think winning back-to-back titles probably for the first or maybe second time in my career gives me even more motivation to make the same success in the future.”