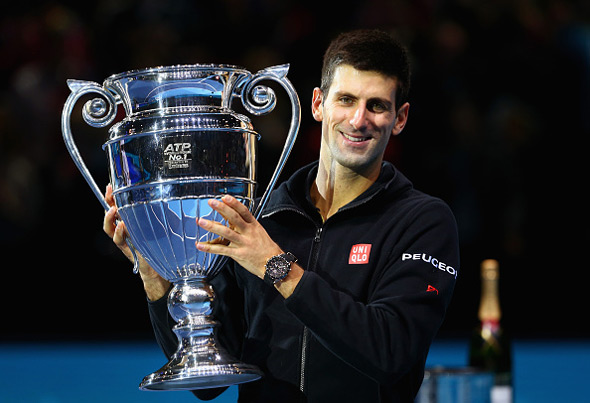 Nole has clinched year-end no.1 spot for the third time in four years!

World no.1 Novak Djokovic delivered another dominant performance to defeat Tomas Berdych 6-2, 6-2 in 69 minutes at the Barclays ATP World Tour Finals on Friday and reach his fifth semi-final at the season finale.

The pair met for the 19th time with Djokovic now leading their FedEx ATP H2H series 17-2.

Djokovic will face Group A runner-up Kei Nishikori on Saturday at 14.00 (15.00 CET). They have played each other on four occasions, with both recording two victories.

Nole’s third round-robin win at The O2 assured him of the top ranking. The Serb extended his unbeaten run indoors to 30 matches and sealed his 60th match win in 2014.

“It’s been a long year and it’s one of the ultimate challenges. I’m just glad to be standing here with the trophy knowing how many legends of the sport have done the same before. It’s an extreme honour to have them with me here,” said Novak.
“I want to thank my team and my family and all the people who supported me. Being number one in the world is the biggest challenge a tennis player can have. This trophy is the crown for all the achievements in these 12 months. In my private life, even in my professional life, it was probably the best year overall. I’ve been married and became a father just recently. It’s a beautiful feeling and I’m full of joy.”

The 27-year-old Belgrade native previously finished at the top in 2011 and 2012, and is the seventh player to finish year-end no.1 at least three times, joining Pete Sampras (6), Jimmy Connors and Roger Federer (5), Ivan Lendl and John McEnroe (4) and Rafael Nadal (3).

Djokovic first ascended to no.1 in the Emirates ATP Rankings on July 4, 2011, after winning his first Wimbledon title.