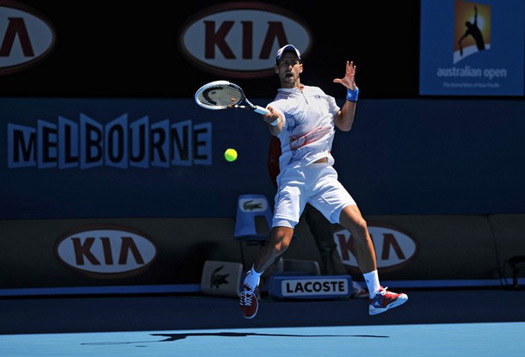 World no.1 continued to impress at Melbourne Park, dismissing Nicolas Mahut on Saturday to advance to the Australian Open fourth round.

He wrapped up the victory in 74 minutes, improving to a 2-0 record against the world no.81.

The defending champion was in cruise control from the beginning of the match. He broke Mahut three times to take the opening set 6-0 in just 24 minutes.

The Frenchman closed out his first game of the match in the second set and got the ovation from the crowd. But Nole wasn’t too generous on his rival’s 30th birthday. He won the set 6-1, and made a triple break again in the third set for convincing victory.

“Credit to Nicolas. He had some strapping around his knee. Evidently he was not moving well, he was not able to perform his best, but he didn’t want to retire and he wanted to stay all the way, “ said Novak. “I wish him happy birthday.”

“Looking just at my game, it went really well, really fantastic from serve, the return, all the shots, going to the net. I’m happy with the way my first week went here in Australia, and hopefully I can continue the same way in the second one.”

Nole’s average first serve speed was 186km/h, and his fastest serve of the match was 204km/h.

The Serb capitalised on eight of thirteen break point chances, while Mahut failed converting his only opportunity.

The top seed will go for his 11th straight match win in Melbourne when he faces former world no.1 Lleyton Hewitt on Monday.

Novak has reached the quarter-finals or better in his past four tournament appearances, highlighted by his titles in 2008 and 2011.