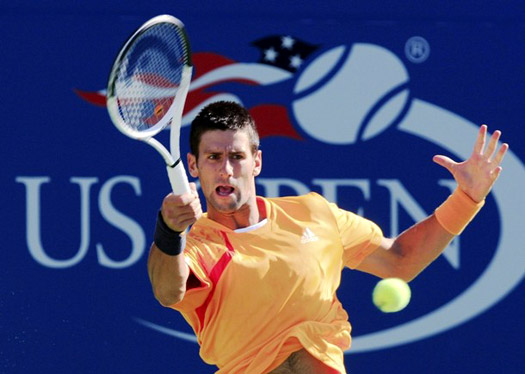 The best Serbian tennis player defeated world no.155 Australian qualifier Carsten Ball in straight sets 6-3, 6-4, 6-4 in 1 hour and 49 minutes to reach the US Open third round.

Novak was dominant from the very beginning of the match. He played aggressively, and Ball could not find a solution for his game. The Australian made many unforced errors, and his best weapon, his powerful serve, let him down.

Djokovic broke Ball’s service in the fourth game of the match with a crosscourt backhand winner and then held to increase his lead to 4-1. He closed the set 6-3 in less than 30 minutes.

A break in the third game was enough for Novak to take the second set 6-4.

The 22-year old Serb held in the eighth game of the third set to level the score. Ball made a double fault at deuce to hand Djokovic a break point. Nole sealed the break at the third attempt and then served it out for 6-4 to book his place in the third round.

Djokovic served 3 aces to Ball’s 9, and made 1 double fault to his opponent’s 7.
Novak hit 22 winners to Ball’s 29 and made 18 unforced errors, 27 less than the Australian.
The Serb capitalised on 3 of his 16 chances for break, while Ball failed to convert the only break point he had.

Novak after the match:

‘It’s always hard to predict what is going to expect you in the match against a guy who you don’t know basically. And I haven’t seen any of his matches. I haven’t been introduced to his game. So I didn’t know what to expect. I knew he’s a big guy with a big serve, lefty. That’s why I needed to really stay focused and try to read his game and try to be able to recognize the positions and his disadvantages.’

‘Physically I feel great. I feel ready. I feel confident on the court. Mentally motivated and willing to do more. Just have a big desire to perform good and to win the matches. And I think you could see that on the court. I just try to push myself always to the limit. Sometimes I’m perfectionist, I want everything to go well. I always try to give 100% on the court. So this is what I expect from myself in the first place and upcoming matches. And hopefully, like in the past couple years, I can do well.’

The two players have never play against eachother before.