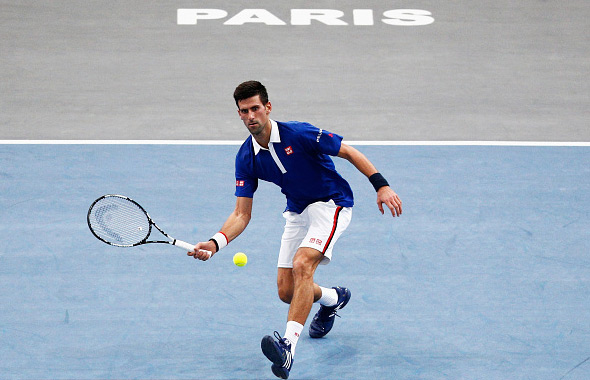 Top-seeded Novak Djokovic overcame strong resistance from Tomas Berdych to reach the semi-finals of the BNP Paribas Masters on Friday.

The world no.1 came up against his toughest test this week, but prevailed to clinch a hard-fought 7-6 (3), 7-6 (8) victory in two hours and seven minutes.

With the win, Nole extended his winning streak to 20 matches (28-0 in sets). He now holds a 20-2 ATP Head2Head advantage over the Czech.

Novak saved a set point in the 12th game of the opening set and went on to win a tie-breaker. He also saved a pair of set points in the second-set tie-break before pulling out his 680th career victory.

“I definitely didn’t want to go into the third,” said Djokovic. “Credit to Berdych for playing on a high level, pushing me in the back of the court with the depth of his shots, especially from the forehand side. I thought he did very well. It was decided in tiebreaks, and very few points decided a winner today. Could have gone a different way. He had set point in the first set, as well. In the important moments, I just managed to hang in there, just stay tough. That’s what I’m most proud of.”

For a place in the final, Novak will play against no.4 seed Stan Wawrinka on Saturday in their 23rd ATP Head2Head meeting (18-4 career mark). The Swiss battled into the last four with a 7-6 (8), 7-6 (7) triumph over seventh-seeded Spaniard Rafael Nadal.