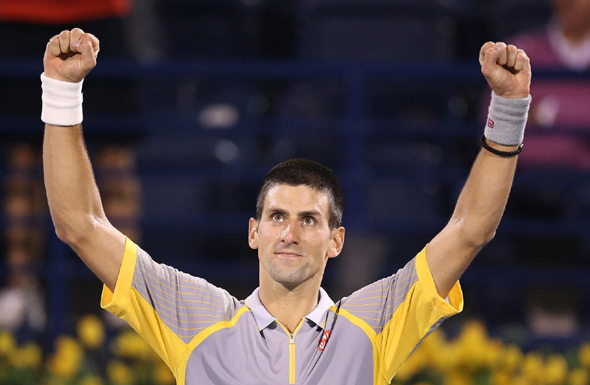 Novak capitalised on his first break point opportunity in the sixth game of the opening set, and closed it 6-3 in 35 minutes.

Players exchanged breaks twice in a tight second set, before Djokovic seized the initiative in a tiebreaker to seal the match.

“I was very pleased with the performance overall and the way I handled myself in the tough moments,” Novak said.  “Mentally I stayed tough and believed that I could go all the way and win in straight sets. I have been very positive and confident, so I think that resulted with overall a really good performance.”

Nole converted 3 of his 6 break point chances and won 83 per cent of first service points to lock up the victory over the Argentine in one hour and 44 minutes. He improved to 8-2 career record against del Potro.

The 25-year-old Belgrade native won his 17th consecutive match and improved his overall record to 12-0 on the season.

“I want to win this title, and whoever I play against tomorrow I will try to enjoy the match and of course fight to get to the trophy. I think it’s going to be a thrilling match to watch. Very close, I think. I’m going to have to be on top of my game.”