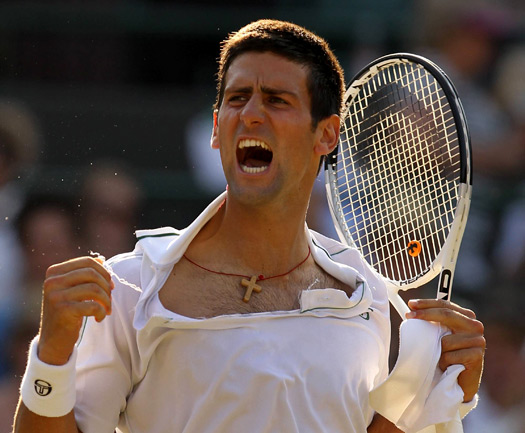 Third-seeded Novak Djokovic booked his place in the quarter-finals of Wimbledon for the third time in his career, after defeating world no.26 Australian Lleyton Hewitt in four sets 7-5, 6-4, 3-6, 6-4 in 2 hours and 54 minutes.

There were no chances for break in the first eleven games of the opening set. Djokovic grabbed a first set point when Hewitt hit a forehand long, and although Hewitt thought he had saved it with a great first serve that Djokovic returned long, the Serb challenged successfully forcing Hewitt into a second serve. Novak wrapped up the set 7-5 in 43 minutes when Hewitt sent a cross court backhand wide.

Djokovic opened the second set with a love service game keeping the momentum going. He earned two break points in the very next game, but Hewitt saved both. Nole used his second chance for break in the tenth game for 6-4 when Hewitt sent a backhand long after a 22-shot rally.

At 2-1 in the third set, the 23-year-old Serb called for medical timeout because of a problem with breathing. Hewitt broke his serve twice and took the set 6-3.

Novak made a break in the opening game of the fourth set, when Hewitt sent a forehand long of the baseline. The world no.3 consolidated the early break and earned another two break points, but Hewitt saved them both with big first serves that Djokovic could only hit long. No.15 seed broke back in the fourth game for 2-2. The 29-year-old Australian sent a forehand long of the baseline to hand Novak another break point in the ninth game and handed him not only the break with a double fault but also the opportunity to serve for the match. Nole served out the match to love, coming up with a fantastic cross court forehand winner after a long rally.

”I lost my focus little bit. I struggled with the stomach discomfort a little bit in that third set. And he got back into the match by breaking me 2‑all in the third set. Then it could have gone either way really. If I made that double break in the start of the fourth, maybe I would win easily that fourth set. But, you know, he came back. That’s why he’s a big champion, because he never stops, you know, fighting. I didn’t know what’s gonna happen up to the last moment. I was fortunate enough to get that break at 4‑all and then held my serve quite well”, said Novak after the match. “I’m really happy with my performances so far in Wimbledon. I think I’m getting on the right way and playing the better game than I did in last couple months. Just hope to continue.”

Djokovic served 9 aces to Hewitt’s 5.
He hit 41 winners to his opponent’s 27.
Nole converted 4 of his 9 chances for break, while Hewitt capitalised on 3 of his 9 break points.

Djokovic and Lu have never met before.