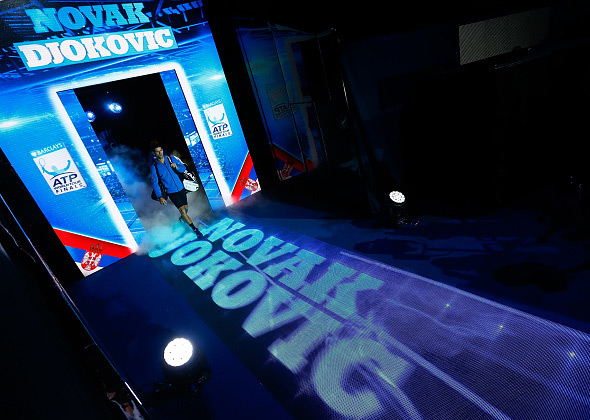 Novak is through to the final of the Barclays ATP World Tour Finals for the fourth straight year!

In another impressive performance on the big stage, Novak broke Rafa once in the first set and twice in the second, denying one of his greatest rivals a single break point opportunity. The 28-year-old Serbian star won 89% of points on his first serve and was 7/8 when approaching the net. He became the first player to claim 30 match wins against Top 10 opponents in a single season.

“It was a great performance from the very beginning. I was trying to be aggressive and dictate the play, and I managed to pull out my best game when it was needed the most,” Novak said. “Hopefully I can perform in the final as well as I did today.”

Novak reached the finals of the prestigious season-ending event for the fifth time in his career, fourth time in London, and improved to an 81-6 record on the season. He has earned 800 ATP points so far. Victory in the final is worth 500 additional points.

The 28-year-old Serbian star will be looking to become the first player in history to capture four successive Barclays ATP World Tour Finals singles titles, on Sunday at 18.00 local time (19.00 CET), when he faces no.3 seed Roger Federer (21-22 H2H).