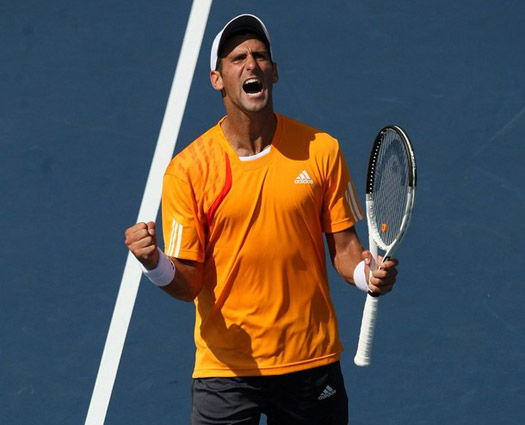 No.4 seed Novak Djokovic defeated world no.10 Spaniard Fernando Verdasco in four sets 7-6(2), 1-6, 7-5, 6-2 in 3 hours and 5 minutes on Arthur Ashe on Wednesday to advance into his third consecutive semi-finals at the US Open (hard, 21,6 million dollars).

The first set went to a tiebreaker. Nole won it convincingly 7-2.

Fernando Verdasco was in total control of the second set. He made three breaks for 6-1.

Djokovic broke his opponent’s service in the fifth game of the third set, but Verdasco fought back to level the score. The Serb made another break in the eleventh game and then closed the set 7-5.

Novak failed to convert three break points in the opening game of the fourth set, but capitalised on his chances in the third and fifth game to take it 6-2.

Djokovic served 10 aces to Verdasco’s 5.
The Spaniard hit more winners 32/46, but also made more unforced errors 41/58.
Novak converted 4 of his 12 break points, Verdasco capitalised on 4 of his 14 chances for break.

Nole after the match:

’It feels great to be back in the semifinal of a Grand Slam. I mean, I haven’t done that in the past three Grand Slams this year, so mentally was very important for me to overcome today’s challenge and to be able to win quarterfinals and to get to the semifinals first time in the Grand Slams in 2009. So now that I’ve done it I feel kind of a relief, and I hope I just can continue playing well and challenge eventually Federer if he gets to the semifinal.'

’We don’t need to talk a lot about him (Roger). His records in US Open, we all know his style of the game. I have been playing against him many, many times and a lot of different kind of surfaces. There are no secrets in each other’s game, so I just ‑‑ it’s a matter of good day. I hope I can have a good day and concentrate, and physically I’m going to have enough time to recover and be ready.’