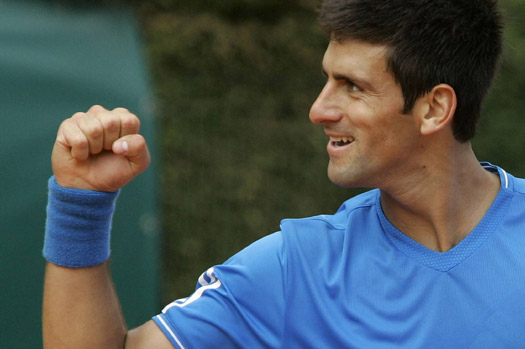 Third-seeded Novak Djokovic rallied from a one-set deficit to oust no.13 seed Stanislas Wawrinka 4-6 6-1 6-3 in 2 hours and 27 minutes on Saturday to reach his first final at the Monte Carlo Rolex Masters, an ATP World Tour Masters 1000 tennis tournament (clay, €2,750,000).

Novak was playing well in the first set. He had four chances to break, in the second and fourth game, but didn’t use them. The 21-year old lost his momentum in the ninth game. His service was giving him trouble, he made three double faults and several unforced errors. Wawrinka used his fourth break point to go 5-4 up and then closed the set 6-4.

Djokovic raised the level of his game in the second set. He won five games in a row breaking his opponent’s service twice, and easily took the set 6-1.

World number three was broken in the second game of the third set, but he broke back immediately and then held to equalise the result. The Serb was impressive in the rest of the match. He made two more breaks and won the set 6-3.

Novak hit 15 winners to Wawrinka’s 24, and made 32 unforced errors to his opponent’s 58. Nole converted 5 of his 14 break points, while the Swiss capitalised on 2 of his 6 chances for break.

Djokovic and Nadal have met 15 times, the Spaniard leads 11-4.