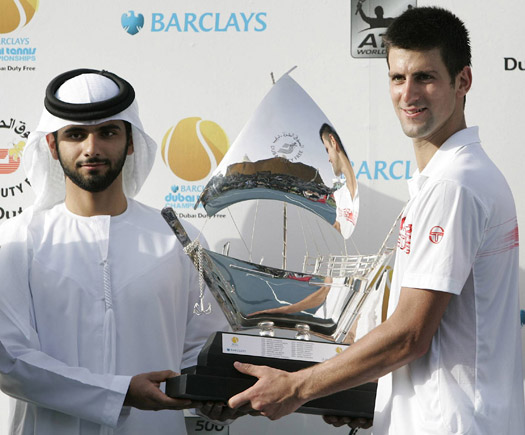 World no.2 Novak Djokovic won his second straight Barclays Dubai Tennis Championships trophy and defended a title for the first time in his career! He defeated no.7 seed Russian Mikhail Youzhny 7-5, 5-7, 6-3 in 3 hours and 22 minutes.

Djokovic was leading 7-5, 2-0 on Saturday in rain suspended final. The 22-year-old Serb found himself 15-30 behind on serve in the fifth game, thanks to some attacking play from Youzhny, who won a great rally with a drive volley to get to break point. Novak handed the break to the Russian with an unforced error, but managed to break back immediately for 3-3. The best Serbian tennis player held to go 4-3 up, earned two break points in the eighth game and converted the first to increase his lead. He was serving for the set at 5-3, but hit two unforced errors to go 0-30 down and double faulted to give his opponent two break points. Youzhny broke back and held to equalise to 5-5. Nole put the pressure on the Russian in the 12th game, earned a break/set point and capitalised on it to take the set 7-5 with a pass down the line.

Djokovic opened up the second set on serve and took a 40-15 lead, but then the rain started and the players left court. Play resumed 30 minutes later. Novak won the opening game and made a break for 2-0. At 30-15 for Nole play was suspended again and postponed until 11.00h CET on Sunday.

Novak easily held for 3-0 lead, but Youzhny won three games in a row to level to 3-3. At 4-3 Djokovic missed a fantastic opportunity to break. The Russian used his chance, made a break and was serving for the set. The defending champion broke back immediately for 5-5, but no.7 seed earned three more break points, broke to love and had a second opportunity to serve for the set! He served out to love to win it 7-5.

Djokovic was 3-0 up in the third set too, but Misha fought back to equalise to 3-3. The seventh game brought new drama. Nole faced two break points but held for 4-3. The next game was crucial. Djokovic capitalised on his second chance for break and then closed the set and match 6-3.

”This win means the whole world to me. Of course there are always people who are saying he can’t do it. This is another success in my career that I wasn’t able to make in the last two years. But now, finally, I did it, and it’s a big relief. So in the future I just hope I’ll make a couple more of those. It’s a big boost because I believe in myself. Even when I play bad, I know I have the abilities… Today was another good example of how much I believe in myself and how much I fight till the end”, said Novak.

This is Novak’s seventeenth career title. He’s become the second player in tournament history (since 1993) to win back-to-back titles. Federer won three in a row from 2003-05.

Djokovic will be heading straight to Belgrade for next weekend’s Davis Cup World Group first-round match against USA.