Novak earns hard-fought win to reach second round of Wimbledon! 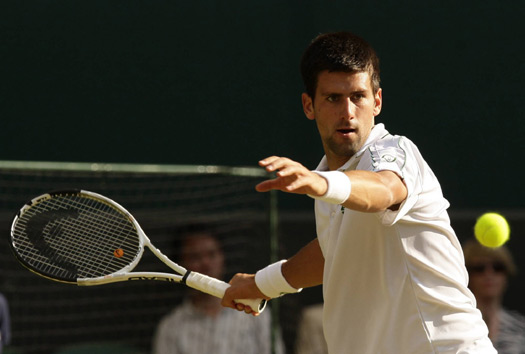 Third seeded Novak Djokovic overcame a challenge by world no.68 Belgian Olivier Rochus and moved into the second round of Wimbledon with a 4-6, 6-2, 3-6, 6-4, 6-2 victory in 3 hours and 51 minutes in the latest finishing match of all time at the Championships.

Rochus got three break points at 0-40 in the seventh game of the opening set. Djokovic saved the first with a powerful serve, and the second with a great forehand, but he hit a groundstroke long at the third and handed the break to his opponent. Novak had two chances in the eighth game to get back into the set, but the Belgian held for 5-3 lead and took the first set 6-4 in 46 minutes.

World no.3 raced into a 5-0 lead in the second set with a double-break. Rochus broke back once, but Djokovic earned three break/set points in the eighth game and converted the first to level the match at 1-1.

Djokovic was broken twice at the beginning of the third set to go 0-3 down. He broke back in the fourth game and had a chance to level to 3-3, but Rochus held to stay ahead. There were three more breaks, two for the Belgian, who captured the set 6-3.

The decision was taken for play to be suspended. There was a 30-40 minute delay, and then the game restarted under the roof.

A break in the third game of the fourth set was enough for Nole to win it 6-4. It wasn’t easy though. In the set that lasted 62 minutes, the 23-year-old Belgrade native had to save seven break points.

Rochus broke Djokovic’s serve in the second game of the decisive final set for 2-0 lead, but Novak fought back with a triple break, winning six games in a row for 6-2.

Djokovic served 17 aces to Rochus’s 1, and made 12 double faults, 8 more than his opponent.
Novak hit 79 winners to the Belgian’s 32, and made 60 unforced errors, 36 more than Rochus.
The Serb converted 9 of his 20 break points, while the Belgian capitalised on 7 of his 17 chances for break.

“I think the break kind of helped me a little bit, because I didn’t feel great at that moment on the court,” said Nole after the match. “So to have a little half an hour of the break and just relax and focus and reset my game and my mind was helpful.”

“As soon as I was starting to play aggressive and well, I was winning in the match,” said the Serbian. “Fourth and fifth set, especially in the fifth set, I showed the real game, the game that I should play… I was very happy that in the end I managed to find the real game.”

Djokovic and Dent have never met before.